Amaravati, Andhra Pradesh, India - It was chilly and dark when His Holiness the Dalai Lama left his Delhi hotel yesterday at the start of a journey that would take him to Vijayawada in Andhra Pradesh. Fog at Gannavaram Airport delayed the landing of his flight, but Andhra Pradesh Speaker, Dr Kodela Siva Prasada Rao, Ministers Palle Raghunatha Reddy and D Umamaheshwara Rao as well as Vijayawada Police Commissioner Gautam Sawang were waiting to welcome him with bouquets and breakfast. He told journalists who flocked to catch a word from him that peace of mind was essential to human happiness and that he was happy to return to Andhra Pradesh, which he regards as home to great Buddhist masters of the past like Nagarjuna. 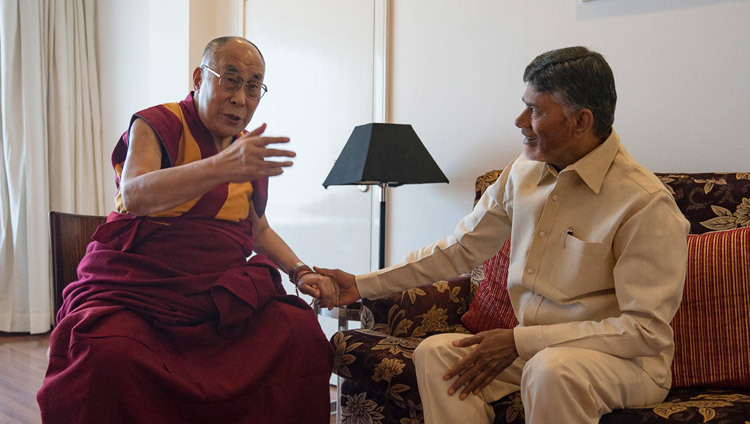 Today the morning was warm and bright as His Holiness drove to the venue of the first National Women’s Parliament, a huge marquee at Ibrahimpatnam on the way to Amaravati. Andhra Pradesh Chief Minister Nara Chandrababu Naidu was delighted to receive him and escort him inside. His Holiness spent some time in conversation with him and fellow guests Shri Venkaiah Naidu, Smt Kiran Bedi, Smt Ela Ben Bhatt before they took their places on the huge stage.

The National Song and State Anthem were sung and an inaugural lamp was lit. Chairman of the Conference, Speaker Dr Kodela Siva Prasada Rao welcomed guests and participants alike and introduced the occasion saying how privileged and happy he felt to be participating in this first National Women’s Parliament. The aim, he said was to achieve women’s empowerment and their increasing participation in decision making as leaders.

In a long, rousing speech, mostly in English, Chief Minister Chandrababu Naidu welcomed all the guests and members of the 10,000 strong audience. He expressed his deep happiness to be hosting the event, remarking that he regarded it as historic and significant that it should be taking place at the confluence of the Krishna and Godavari rivers and adjacent to a region associated with Nagarjuna of whom His Holiness counts himself a student. He added that NT Rama Rao, founder of the Telugu Desam Party that he now leads had paved the way by introducing women’s property rights and better educational opportunities. He reiterated his aim of fully empowering women and introducing 33% reservation for many opportunities for women. He hoped women’s dreams would become a vision that in turn would become a reality.

Chief Guest, Union Minister for Urban Development Shri M Venkaiah Naidu spoke spiritedly in a mixture of English, Telugu and Hindi. He too announced how happy he was to attend the National Women’s Parliament where women’s issues could be discussed, debated and decided—the very principles of democracy. He noted that women already do a great deal of work caring for their children, their families and their homes, but this work is not included in the national GDP. He referred to women as unsung heroes. 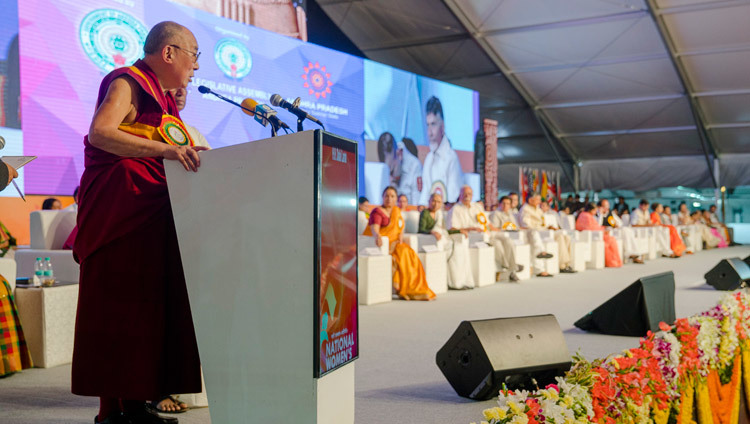 A short film introduced the extent of His Holiness’s activities to the audience before he was invited to address them.

“Although I usually start by greeting my brothers and sisters, today I’d like first to salute my elder sisters and younger sisters, and then my younger brothers as well. It is my fundamental belief that we are all the same as human beings. All 7 billion human beings alive today are essentially the same physically, mentally and emotionally. I believe we need to work together with a sense of the oneness of humanity. Many of the problems we face today are of our own making, deriving as they do from our tending to view others in terms of ‘us’ and ‘them’.

“Children don’t discriminate in this way, they take others as they are. But, as they grow up, they pay more attention to the differences between us—such as nationality, religion and gender—rather than to what we have in common. Fundamentally, as human beings, we are the same.

“I’m committed to the promoting a sense of sisterhood and brotherhood, based on the oneness of humanity. I often tell people that in the early days of human society, people hunted and gathered their food, sharing what whatever they had. Later, as agriculture and an idea of property emerged a need arose for leadership. And since physical strength was the criterion, men became predominant. Since then improved education has brought about the prospect of equality, but today our education system itself is inadequate. Children are naturally honest, open and compassionate, but since these qualities are not regarded as relevant to making money or exerting power, they grow up to adopt more material goals.

“We have to make a greater effort to promote kindness and compassion, qualities in which women are more naturally adept, so the leadership of women is necessary if we are to succeed.

“If the 21st century is to be different from the 20th we cannot be complacent with things as they are, if nothing changes there’ll be nothing but suffering. Here and now we are peaceably discussing the empowerment of women, while elsewhere people are killing each other. We have to recognise others as like our sisters and brothers and if we do, we can make the 21st century an era of peace. 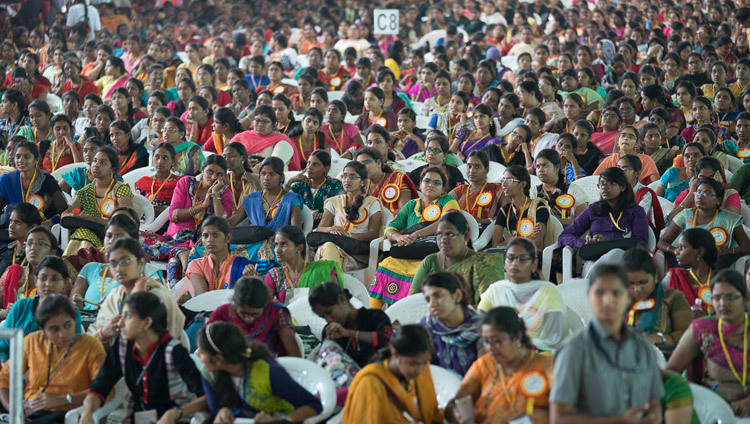 “Peace in the world depends on peace within. If we have that we’ll approach problems in a spirit of dialogue, compassion and respect for the rights of others—always a better solution than resorting to a use of weapons and force. External disarmament depends on inner disarmament in which women have a special role to play. In my own experience, my first teacher of compassion was my mother. I never saw anger on her face. All 7 billion human beings are born from a mother and most of them enjoy the shelter of her affection.

“Through experiment and investigation scientists have concluded that basic human nature is compassionate. This is a source of hope. They have also established that women are more sensitive to others’ suffering and distress. Since warriors and others who disrupt the peace are men, if the majority of our countries were led by women, I believe the world would be a much safer place.

“We need not only warm-heartedness, but also to use our intelligence to the full. Anger clouds our intelligence and our ability to look at things from a wider perspective, whereas education should strengthen our basic human values.

“Women should develop greater self-confidence. Don’t think of yourselves as meek. You already have the potential to develop compassion, but what you need in addition is steadfast determination.”

His Holiness concluded that he had little to add to the rousing ambitions of the previous speakers who had spoken so eloquently, but he joined them in looking forward to the real uplift of women.

Convenor of the meeting Shri Rahul Karad explained how he had brought the idea of a Parliament for Women to Shri Chandrababu Naidu’s attention and had won his support. However, Naidu stipulated that it should take place under the auspices of the State Assembly which is how the Speaker became Chairman of the meeting. Karad was fulsome in his praise for the Chief Minister’s vision and commitment. 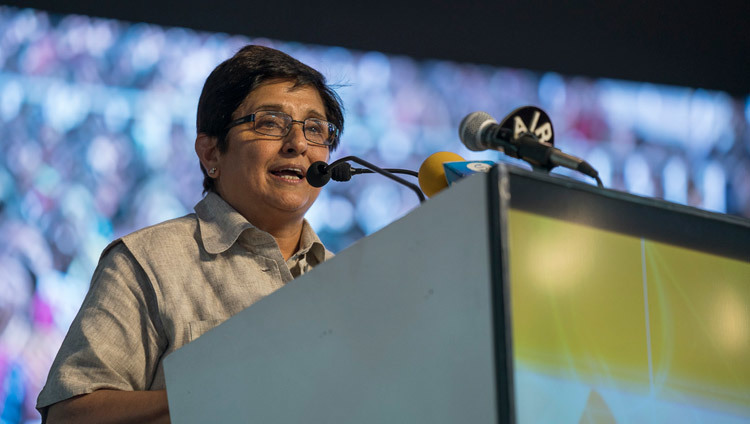 Kiran Bedi, who was the first woman to be an officer of the Indian Police Service and who has, since her retirement, become a social activist and politician, spoke next. She began by repeating “Hello everybody” until she received an audible response from the audience. She declared that women are as good as the opportunities they get, whether they are in the family, the village or wider community. If they get the opportunity there’s nothing to stop women reaching for the top. Using opportunity to create opportunity is a way to create leadership. With courage women can be better parents, teachers and leaders.

She cited the example of the Swachh Bharat or Clean India campaign and her experience as Governor of Pondicherry of the amount of money being poured into cleaning drains that would not need cleaning if people were more attuned to the disposal of rubbish. She believes that such common sense leadership comes easily to women and the money saved could be better used to support education.

Smt Shirin Sharmin Chaudhury, Speaker of the Parliament of Bangladesh, where both Prime Minister and Leader of the Opposition are women, asked why we are still talking about the empowerment of women, offering the reply that it’s because it is still not a reality for most women. She clarified that participatory democracy has to be inclusive democracy.

Patron of the event, veteran Gandhian Smt Ela Ben Bhatt asked if women really have a voice if 48% of voters are women, but they only have 11% representation. She added that women’s issues are the nation’s issues.

Actress and goodwill ambassador Smt Manisha Koirala asked if anyone has seen a bird fly with only one wing, suggesting that it was as absurd as promoting the interests only of men, but limiting the empowerment of women. She suggested that in a patriarchal society the birth of a boy is celebrated with joy. Is it the same for a girl? She reported that when she was born and her grandfather was told he pulled a face. Her mother was hurt and wouldn’t speak to him for weeks and she herself was hurt when the story was told to her much later. She recounted that when she was younger and encountered such double standards in the way men and women were treated she rebelled against them.

As His Holiness left the event, a steady stream of well-wishers and other members of the public hoping to pay their respects or take selfies with him clustered around him. At the same time journalists hefting video cameras and others thrusting microphones in his direction clamoured to catch his views in response to their questions. Eventually he reached his car and was able to leave for his hotel. Tomorrow, he will travel on to Hyderabad.