New Delhi, India - The streets of New Delhi were quiet this Sunday morning as His Holiness the Dalai Lama drove under misty skies to the Talkatora Stadium at the heart of the city, where Vidyaloke had arranged for him to give a public talk. Once again, Mr & Mrs Analjit Singh and their son Veer met him at the door and escorted him inside, where he greeted several old friends. He joined in lighting a traditional Indian lamp to inaugurate the occasion and took his seat. Two cultural performances took place: a robust rendition of a song to Saraswati and a Kathak dance to a melodious chanting of the ‘Heart Sutra’ in Sanskrit. His Holiness expressed his appreciation of both. 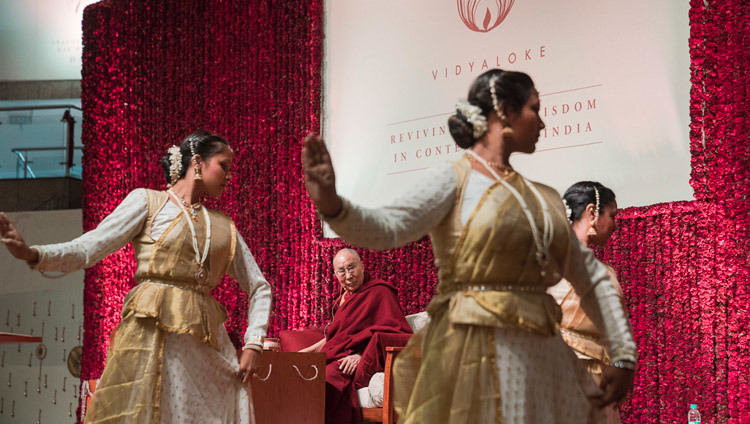 Veer Singh welcomed the more than 3000 capacity crowd to Vidyaloke’s inaugural public talk, noting that for all the progress that has been made in some ways, the situation in the world seems vulnerable as never before. Observing that everyone present had come to enjoy listening to the ‘Holder of the White Lotus’, Analjit Singh introduced His Holiness.

“Brothers and sisters, I am indeed very happy to be here with you,” His Holiness declared, “several of your faces are familiar. You already know what I am going to say. We are all the same as human beings, which is why I always stress the need to acknowledge the oneness of humanity. We are mentally, emotionally and physically the same. We all want happiness—that’s the purpose of our lives. There is no guarantee of what will happen to us, but we live in hope that the future will be good. Our survival depends on it.

“We’ve just listened to a song to Saraswati, goddess of wisdom. Wisdom from a Buddhist point of view concerns an understanding of emptiness, which indicates not nothingness, but a lack of absolute independence. Change and development are possible only because things are dependently arisen. If they were independent, without relation to causes or other factors, nothing could change.

“Not only do I emphasize the oneness of humanity, this is the essential message of all the major religious traditions. If we were able to regard each other as brothers and sisters, how could we harm or kill each other? Today, if someone is killed by an elephant or tiger, it’s news, but when people kill each other it hardly registers. During the 20th century, some historians assert that 200 million people died in violence, but to what benefit? If the world had improved as a result, it might be possible to justify such violence, but in fact it only brought suffering.

“Since the start of this 21st century, violence has continued to burn, in some cases even in the name of religion. This reflects the outdated thinking that the way to resolve problems is a resort to the use of force. But violence never puts an end to violence. That can only be done by reaching out to others in a spirit of friendship and reconciliation—there is no other way. 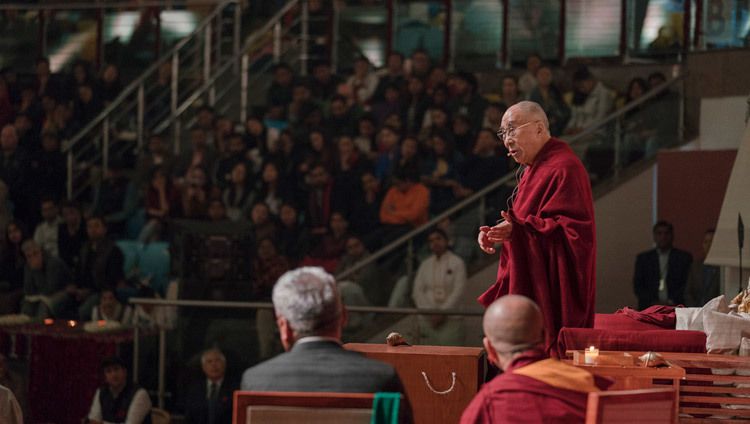 “In today’s reality, we need a sense of the oneness of humanity—an appreciation that climate change, a need to preserve the natural environment, the effects of the global economy affect us all. We have to work together to manage their pitfalls. However, we are still locked into old ways of thinking in terms of ‘us’ and ‘them’.”

His Holiness referred to the marvellous human brain as our greatest gift, but stressed that it be used not destructively but in positive ways. He pointed out that most of the problems we face are due to narrow-mindedness and short-sightedness. From a Buddhist point of view all disturbing emotions derive from ignorance, for which the only solution is education, not rituals or prayers. However, modern education’s focus on material goals, with a corresponding neglect of inner values, leaves it inadequate to the need.

“The long-standing Indian tradition that the course of action is non-violence while the motivation is karuna or compassion is very relevant to the world in which we find ourselves today. We are social creatures, biologically equipped to respond to, and with, love and compassion. Our intelligence makes us capable of extending love and compassion to all 7 billion human beings. Our basic human nature is compassionate, while love is the source of our survival.

“Values like love and compassion and knowledge of the workings of the mind and emotions that we learned from India, we Tibetans have kept alive for more than 1000 years. These qualities continue to be relevant in today’s world and I appreciate the efforts that are being made to revive them. We will find peace of mind, not through prayer and ritual, but the employment of reason.”

Answering questions from the audience, His Holiness advised dealing with stress by taking the practical advice of an 8th century Nalanda master to assess the challenge you face and consider whether you can overcome it. If you can, there is no need to worry, and if you can’t, worry will do no good.

He noted with admiring approval that India, the world’s more populous democracy is relatively peaceful because democracy, the rule of law and freedom of expression prevail, but also because of its intrinsic traditions of ahimsa and inter-religious harmony. He observed that among the ancient civilizations of Egypt, China and the Indus Valley, the Indus Valley seems to have given rise to the greatest number of thinkers and philosophers, including the Buddha.

He reported a conversation he had had with a Swami in Bangalore, someone who organizes a significant program to feed poor children. They agreed that Hinduism and Buddhism have ethics, concentration and insight or wisdom—shila, shamatha and vipashyana—in common. What differentiates the two traditions is their assertion of self or selflessness—atman or anatman. But, His Holiness said with a laugh, “That’s a matter of our own private business.”

His Holiness reiterated his view that religions have three aspects. There are the essential religious practices of love and compassion, tolerance, self-discipline and contentment. The various philosophical views concerning the existence of a creator, the laws of causality and so forth serve to support these practices. However, there are also cultural accretions that come from previous eras like caste discrimination that have no place in a democratic society where everybody is considered equal. He asserted that such customs should change and that spiritual leaders have a responsibility to speak out and say as much.

Asked to recall something funny that had happened to him in the course of the broad experience of his life, His Holiness talked about how he likes to smile and how much he loves it when others respond. He reported that he actively encourages Japanese, who tend to be too serious to smile. He admitted that there can be all sorts of smile from general smiles to artificial smiles, sarcastic smiles and diplomatic smiles. But there was one occasion in Germany when even his smile was not effective. It was early evening as he sat in a car. As a young woman walked towards him, he smiled at her, but instead of returning his smile, she scowled in suspicion at this strange person in strange attire. He felt he had no choice but for once to also look away.

Finally, asked what India can do for the world, he advised:

“What’s past is past, nothing can change that. But the future can be different if we choose to make it so. I am part of the 20th century generation whose time is up. However, those of you who belong to the 21st century have the opportunity to create a better world and may live to enjoy it. But this will not happen by itself. You have to cultivate a vision of a happier, more peaceful future and make the effort now to bring it about. This is no time for complacency—hope lies in the action you take.”

In a meeting after lunch to discuss with Vidyaloke participants how to move forward, His Holiness was clear that he was not talking about spiritual development so much as helping more people find out how to be happy on a day to day basis. “Our target,” he said, “is humanity not believers.”

He reported that he recently told monks in the Tibetan monasteries in South India that if he feels there are people working actively to keep the Nalanda Tradition alive, he will be able to relax when it comes to his time to die. He observed that if he is convinced that the next generation are really working to build a better world, that will also put him at ease. He thanked them for what they have done so far and looked forward to further meetings in the near future.