Ritual Offering Dance Prior to the Kalachakra Empowerment January 9, 2017

Bodhgaya, Bihar, India - After several brighter days, today, early morning mist and cloud had returned when His Holiness the Dalai Lama made the short journey from Namgyal Monastery to the Kalachakra Temple. He participated in a longer session of preparatory rites, accompanied and supported by the usual team of monks. At the same time an assembly of Lamas occupied the other half of the temple, where, since yesterday they have been reciting Tara prayers and mantras dedicated to His Holiness’s long life. This collection will continue until the ceremonial Long-Life Offering that is to be performed on 14th January. 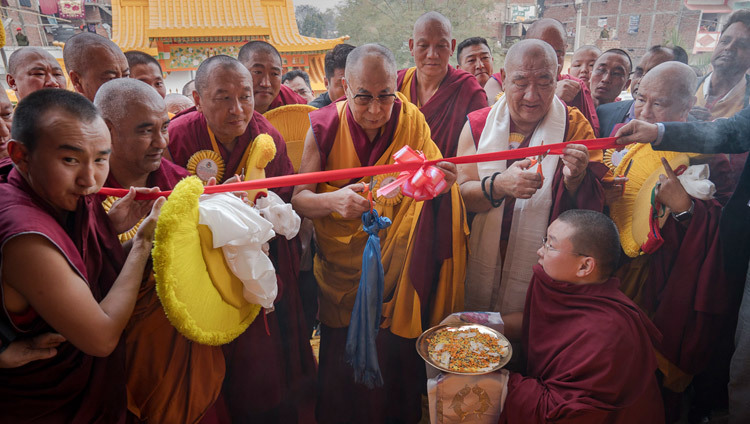 From the Kalachakra Temple, His Holiness drove to inaugurate the new Gandantecgchenling Mongolian Temple. Welcomed on arrival by the Khambo Lama, His Holiness climbed the steps and cut the ribbon at the front door to formally open it. Making his way through eager throngs of Mongolians—600 monks and 1,200 lay-people—to the temple upstairs, he paid his respects before statues of Buddha Shakyamuni, Je Tsongkhapa and the first Khalkha Jetsun Dhampa and took his seat on the throne.

The Khambo Lama expressed gratitude to His Holiness on behalf of all Mongolian monks and devotees for taking the time to come to the temple to consecrate it. He mentioned how Buddhism had flourished in Mongolia until the early 20th century when it was severely restricted. The restoration of democracy has allowed it to be revived. He expressed the wish that the Battsagaan Temple play a key role in that revival and provide a refuge for Mongolian pilgrims to Bodhgaya.

His Holiness asked all the monks to chant the single verse mandala offering loudly, which they did, the sound of their voices filling the building. They followed this with the Ganden Lhagya prayer.

In his remarks His Holiness acknowledged the unique connection that has long existed between Tibet and Mongolia.

“My Dharma brothers and sisters, you have built this temple, invited me to consecrate it and I’m very happy to be here. I have made several visits to Mongolia and it’s my observation that our countries enjoyed close connections even before we adopted Buddhism. As the Khambo Lama recalled in his speech the Buddha is supposed to have prophesied that his teaching would spread from the north to the north. This has been interpreted as meaning that it would spread to Tibet and then on to Mongolia. 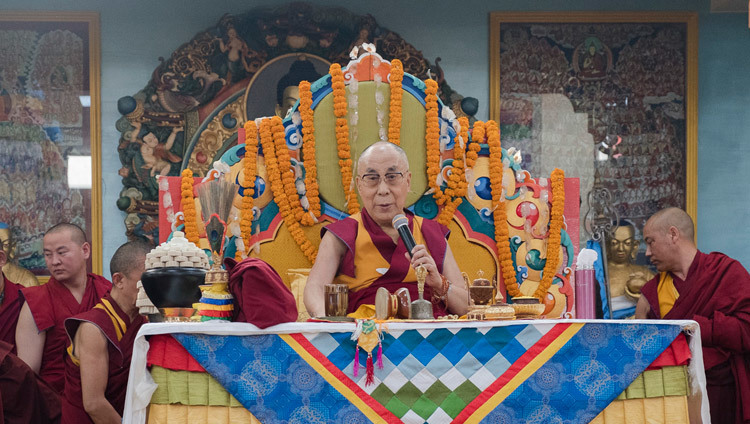 “The third Dalai Lama, Sonam Gyatso, went to Mongolia and received the name Dalai that now belongs to the lineage. My predecessor, the 13th Dalai Lama also fled to Mongolia when there were threats to Tibet in the early 20th century.

“In the past many Mongolian monks came to study in Tibet and several become really top scholars. Again, as the Khambo Lama mentioned, since you’ve regained your independence and established democracy, you have been able to revive the Dharma on the basis of strong devotion.

“This place, Vajra-asana, is truly sacred. This is where Buddha Shakyamuni attained enlightenment and where subsequent Indian masters like Nagarjuna and his followers practised. We find Thai, Burmese and Japanese temples here, so it is appropriate that you should have constructed a Mongolian temple too.

“Since you are intent on reviving and preserving the Dharma, it is important to study and practise. The doctrine entails scripture and realization, which will be preserved only if you study the Three Baskets and practise the Three Trainings. To do this, is to be 21st century Buddhists. The Khambo Lama and the monastery must ensure there is a conducive atmosphere for this to take place.” 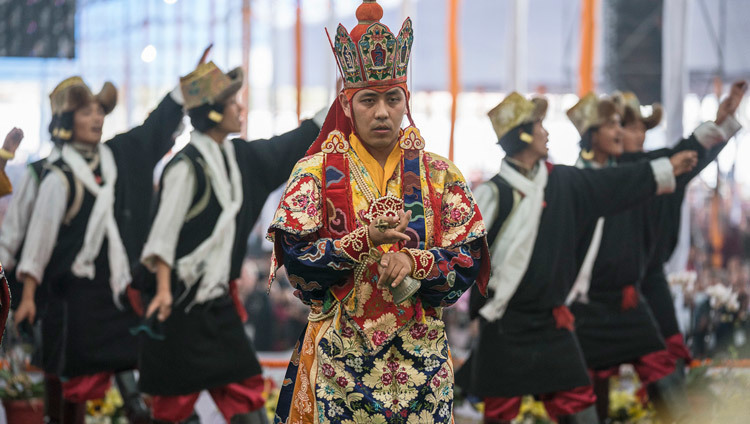 Back at the Kalachakra Temple after lunch, the stage on which His Holiness’s throne and the thrones of other lamas usually stand had been cleared. His Holiness sat on a throne to one side. Construction of the sand mandala, which represents the palace of Kalachakra and associated deities, was completed yesterday. Today, an Offering Dance was to be performed by sixteen costumed monks of Namgyal Monastery, led by a Ritual Master, to a musical accompaniment of horns, drums and cymbals. The dancers visualize themselves as offering goddesses who make offerings of concentration to the assembly of deities of the Kalachakra Mandala. It is a celebration prior to the start of the Empowerment tomorrow.

While the monks were performing their stately dance, further to the front of the stage, groups of lay people, played, sang and performed their own dances. The Tibetan Institute of Performing Arts (TIPA) gave three professional performances derived from the different provinces of Tibet. They were followed by groups from the general Himalayan Region, Shar-kumbhu, Bhutan, Mongolia, Mön, Spiti, Kinnaur, Korea and Kalmykia.

When the dances were over, His Holiness returned to his seat in the inner temple to complete the rituals for the day before returning to his residence. Tomorrow will see the beginning of the actual Kalachakra Empowerment.