New Delhi, India - When His Holiness the Dalai Lama returned to their family house this morning, Mr and Mrs Analjit Singh, with their son Veer, as well as Mr and Mrs Najeeb Jung, received him. They escorted him through the house to the dais beneath a shamiana in the garden. The golden marigolds which yesterday decorated the path and backdrop to the stage were replaced today with garlands of white carnations. The audience of more than 330, mostly Indians who have come of age in the 21st century, greeted His Holiness with smiles and respectful salutations.

Following the chanting of the ‘Heart Sutra’, a brief rendition of the perfection of wisdom, His Holiness addressed all those gathered before him.

“Good morning everybody,” he began, “I don’t consider this as a formal Buddhist teaching so much as an academic review of ideas presented by Nalanda masters that continue to be useful today. As human beings we always have the potential to improve ourselves, remembering that the Buddha did not achieve enlightenment through prayer but through following the path. As the ‘Heart Sutra’ says, ‘all the Buddhas who perfectly reside in the three times, relying upon the perfection of wisdom, become manifest and complete Buddhas in the state of unsurpassed, perfect and complete enlightenment’. The mantra that ends it reveals this— 'Tadyata, gate gate, paragate, parasamgate, bodhi svaha—'It is thus: Proceed, proceed, proceed beyond, thoroughly proceed beyond, be founded in enlightenment,' which encourages practitioners to proceed through the five paths.

“The Buddha was long ago an ordinary being who worked to attain Buddhahood by cultivating the subtle mind of clear light or Buddha nature.” 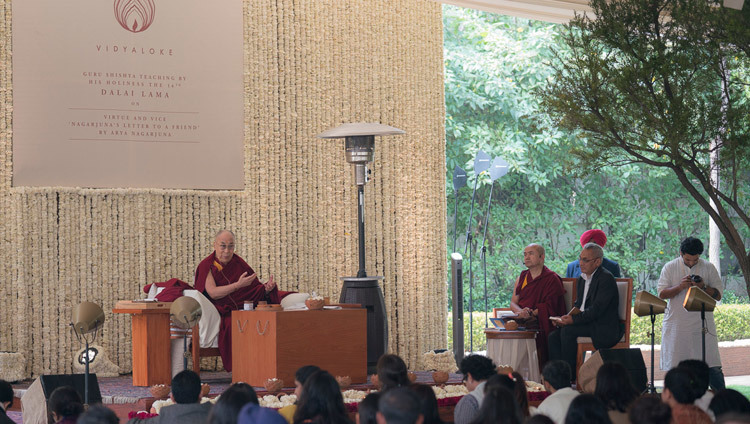 His Holiness explained that disturbing emotions are based on wrong views which can be overcome because they are without any basis, whereas right view is very well founded. He drew a distinction between a general introduction and the main topic of a teaching. He recalled that when he was very young he could not raise much interest in what he was studying, but once he began to understand it as he grew up, he developed a great enthusiasm.

His Holiness referred approvingly to an early 20th century Tibetan master Nyengon Sungrab, who differentiated between what he classed as the general structure of Buddhist teachings and teachings that were particularly suited to specific disciples or groups of disciples. From this point of view, the treatises of the masters of Nalanda belong to the general structure of Buddhist teachings, as do the collection of Sutras. Tantric teachings, on the other hand, are suited to very specific disciples.

His Holiness contended that in Tibet there was too much emphasis on upholding these specialized teachings and their lineages and rituals and not enough on preserving the general structure of Buddhist instructions. He expressed a qualm about the way Dromtönpa distinguished between the lineage of vast deeds, the lineage of the profound and the lineage of practice, as if the first two were not to be practised. He also pointed out that practices involving drops, channels and dream yoga can be found in both Hindu and Buddhist tantra. What distinguishes them, according to Khunu Lama Rinpoche, is that Buddhist tantra is founded on an understanding of emptiness. Indeed, His Holiness remarked, without an understanding of emptiness, practice of Buddhist tantra is meaningless.

Making the point that practice of the Buddha’s teachings should be driven by enthusiasm and positive intent, His Holiness was clear that there is no place for fear. He told the story of a visitor to a monastery in Kham who asked to see the abbot, but was told he had gone to the local village ‘to frighten the old people.’ His Holiness explained the importance of studying the Four Noble Truths, their sixteen attributes and the 37 Wings of Enlightenment, which yield the conviction that achieving cessation is possible—so there is a purpose in following the path. His Holiness reported asking a group of Thai monks, who came to see him, whether they based their study of the Four Noble Truths on reason or scriptural citation and they were clear about the importance of scriptural citation. The Sanskrit tradition, however, places much greater store by the use of reason, logic and analysis. 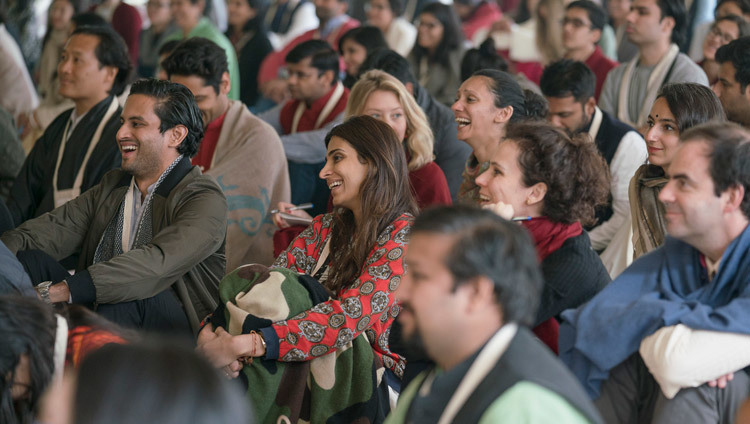 Following a break for tea, His Holiness announced that he had covered the essential content of Nagarjuna’s text in his introduction, so he would not read it further. He compared ‘Letter to a Friend’ to another of Nagarjuna’s works, the Precious Garland or Ratnavali. He remarked that the first chapter of that explains how to conduct yourself so as to ensure the attainment of a good rebirth in the next life. The fifth chapter explains how to cultivate altruism. The second chapter elucidates emptiness, while chapters three and four focus more on the proper conduct of a king. Describing the Buddha as a thinker and a scientist, His Holiness cited Matrceta’s famous verse:

concluding that whether we practise what the Buddha taught is up to us.

In answering questions from the audience His Holiness touched on the need to maintain a sense of optimism, the role of the arts in encouraging virtue, and the possibility that a future Dalai Lama could be a woman. 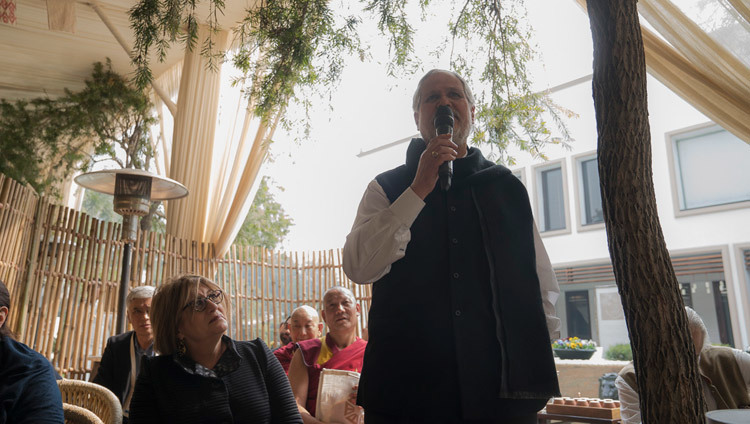 Najeeb Jung asked about religious attitudes being bound to the time of their founders with the result that today religious attitudes to homosexuality, gender equality and even preserving the natural environment are unclear. His Holiness suggested religious traditions have three aspects—religious practice, philosophy and cultural traditions. The basic message of religious practice is the importance of love. Different philosophies concerning the existence or not of a creator are focussed on supporting that. However, cultural customs that belong to an earlier time should be subject to change according to contemporary customs and needs.

As the session came to an end, Veer Singh, on behalf of Vidyaloke, offered thanks to all who had contributed to making it a success and looked forward to similar occasions in future. The audience gathered around His Holiness for a single group photograph and dispersed for lunch, following which His Holiness returned to his hotel. Tomorrow he will give a public talk, also organized by Vidyaloke, at the Talkatora Stadium on ‘Reviving Indian Wisdom in Contemporary India’.