Second Day of the Kalachakra Empowerment - Seven Empowerments in the Pattern of Childhood January 12, 2017

Bodhgaya, Bihar, India - Today, His Holiness the Dalai Lama made another early start. He took his seat in the Kalachakra Temple at half past six to prepare for the granting of the empowerments.

He had a short break for lunch before coming out onto the stage to greet the crowd once again. And the crowd, as is becoming customary, responded with applause. His Holiness saluted the Lamas sitting around him as he approached the throne. 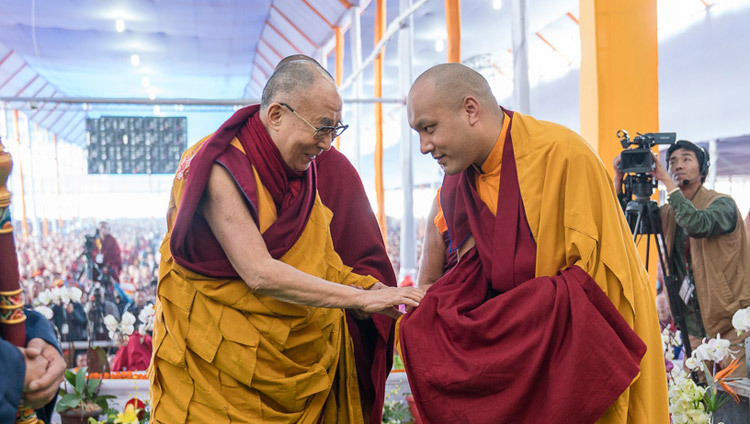 Theravadin monks were present once more to recite the Mangala Sutta in Pali and they were followed by a dozen monks from Mongolia who recited the ‘Heart Sutra’ in their language. After repeating the usual verses of homage and the verse for taking refuge and generating the awakening mind, His Holiness began.

“Today we’ll do the Seven Empowerments in the Pattern of Childhood, and after them, since we have the Heads and Senior Lamas of Tibet’s Buddhist traditions here with us, we’ll do the high and greatly high empowerments as well as that of a vajra-master.

“Over the last few days there were signs that I was getting a cold and today I have a sore throat, but it’s not so bad, so I’ll do my best. We’ll begin with offering a ritual cake to dissuade any hindering forces. This morning I’ve done the self-generation of the complete body, speech and mind mandalas of Kalachakra, as well as the front generation of the mind mandala. The ten vases have been placed in the cardinal and ordinal directions, and above and below. I’ve also done the self-empowerments of the Seven Empowerments. Tomorrow, when we do the high and greatly high empowerments, I’ll use the manual written by the Seventh Dalai Lama.

“With regard to the Seven Empowerments and appendages, the substances used have a connection with the wind energies and the left and right channels which are generated into the main deity and his consort. The empowerment will make the winds and channels serviceable.”

The mandala offering was made by a group from Amdo.

His Holiness explained how things start with space, then the elements emerge. In the end, everything dissolves back into space. He referred to the space particle, which is a subtle particle, and mentioned that scientists today point out that the big bang had to start with something. He wondered whether the space particle, described in Kalachakra, could be that basis. The order in which the external elements emerge is: space, wind, fire, water and earth, whereas the internal element to emerge in space is consciousness.

His Holiness then set about giving the Seven Empowerments. The Water Empowerment, which corresponds to a mother’s washing her new-born child, clears away the defilements of the five constituents and transforms them into the nature of the five mothers. It authorises the disciples to achieve feats and activities dependent on the five mothers during the path, and leaves potencies to achieve the first ground as its result.

The Crown Empowerment, which corresponds to fastening a child’s hair on top of its head, cleanses the defilements of the five aggregates. It authorises disciples to achieve feats by way of the five Buddhas and leaves potencies of the five Buddhas in their mental continuums and gives the power to attain the second ground as its result.

The Crown Ribbon or the Ear Tassle Empowerment corresponds to the piercing of a child’s ears and adorning them. It clears away the defilements of the ten winds and makes them serviceable. It leaves potencies for the ten perfection in the disciples' continuums and grants them the ability to attain the third ground as its result.

The Vajra and Bell Empowerment, which corresponds to a child’s laughing and talking, clears away the defilements of the right and left channels. It leaves the potencies for binding the winds of the right and left channels in the central channel and establishes seeds for the exalted mind, the great bliss and exalted speech in all forms. It also bestows the capacity to purify the internal sun and moon and to attain the fourth ground.

The Conduct Empowerment corresponds to the child's enjoying the five attributes of the desire realm. Just as the objects of the sense powers are generated into deities and blessed, the disciples are authorised to achieve the feats of the male and female Bodhisattvas and enjoy the attributes of the desire realm by understanding their nature, which is bliss and emptiness. It also gives the capacity to achieve the vajra sense powers and their sources, as well as attain the fifth ground as its result.

The Name Empowerment corresponds to the naming of a child. By clearing away the gift of an ordinary name, its clears away the defilements (leading to) birth in the lower realms. It cleanses the action faculties and their activities and authorises disciples to achieve feats of the male and female wrathful deities, granting the capacity to overcome the four hindrances to the four immeasurable wishes and attain the sixth ground.

The monks on the stage, as well as many in the audience, chanted the Kalachakra Aspiration Prayer as His Holiness performed the concluding rituals for the day. Part of those rites included announcing the time the empowerments had been given and on the basis of Khedrup-je’s calculation His Holiness declared that it is now 2594 years since the Kalachakra Empowerment was given by the Buddha.

His Holiness is due to grant the high and greatly high empowerments tomorrow.