Start of Teachings Preliminary to the Kalachakra Empowerment January 5, 2017

Bodhgaya, Bihar, India, 5 January 2017 - His Holiness the Dalai Lama participated in the preparatory rites for the Kalachakra empowerment again this morning. Construction of the sand mandala proceeds apace. After a succession of misty days, today the sun came out. 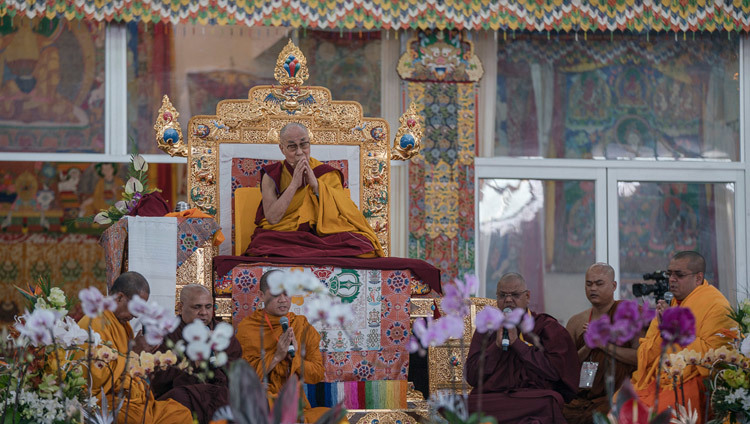 An estimated 100,000 people from 85 countries have reached here for the Kalachakra Empowerment so far. Others continue to arrive. When he stood on the throne and before he sat down, His Holiness waved to his left, right and straight ahead, greeting the members of the crowd. He announced that Theravada monks would first recite the Mangala Sutta in Pali. Then a group of local school children recited the ‘Heart Sutra’ enchantingly in Sanskrit. They told His Holiness it had taken them a month to memorize it.

His Holiness mentioned that the Pali tradition is the foundation of the Buddha’s teachings and recalled the respect he had for the Sangharaja he met in Thailand. With regard to the Sanskrit tradition he noted that it had spread initially to China and from there to Vietnam, Korea and Japan. Another strand of transmission went to Tibet and from there to Inner and Outer Mongolia, and the Russian Republics of Buryatia, Kalmykia and Tuva.

The Pali tradition is the foundation of all Buddha’s teachings, but only the Sanskrit tradition uses reason and logic. Although Tibetans study Sanskrit to some extent, as His Holiness did with his main tutor Ling Rinpoche, they can much more readily study in their own language—Tibetan. This is due to the kindness of Shantarakshita who, in addition to ordaining the first seven Tibetan monks, recommended and encouraged the translation of Indian Buddhist literature into Tibetan.

As if to make the point, the ‘Heart Sutra’ was recited in Tibetan. His Holiness remarked that there are extensive, medium and short renderings of the Perfection of Wisdom sutras. Their explicit content is the wisdom understanding emptiness, which Nagarjuna elaborated on in his writings. Their implicit content, how to progress on the path, has been elaborated by Maitreya in his ‘Ornament for Clear Realization’ and Haribadra’s commentary to it, ‘Clear Meanings’. 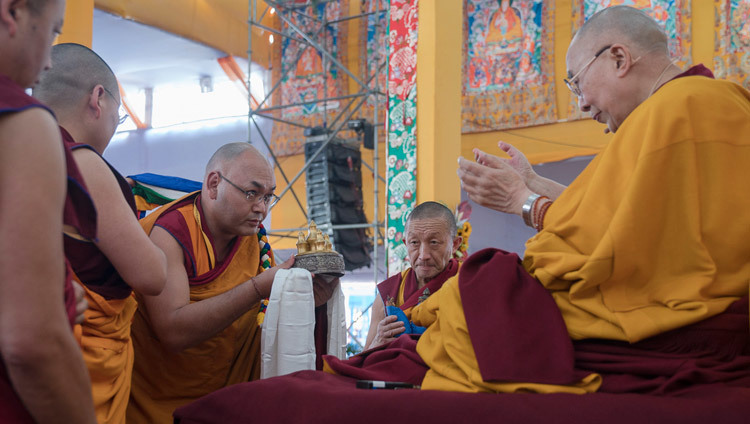 Offering of the mandala and three representations of the body, speech and mind of enlightenment was made by Khenpo Sonam Temphel and veteran Tibetan physician Dr Yeshi Dhonden.

“It’s important to implement the Dharma in practice,” His Holiness advised. “We all want happiness not suffering and happiness comes about when we discipline the mind. Receiving the Kalachakra Empowerment, as I said the other day, brings blessings, but we should be able to ground our practice in the general structure of the path. We can do the practice of tantra on the basis of that. In Tibet we tended to take Buddhism for granted, but we didn’t think about it very much. Now we need to be 21st century Buddhists and find out what it’s really about.”

His Holiness explained that he was going to teach Shantideva’s ‘Guide to the Bodhisattva’s Way of Life’ which tells how to engage in equalizing and exchanging self with others, as well as including a chapter on wisdom. He will also teach the middle volume of Kamalashila’s ‘Stages of Meditation’

“I received the reading transmission of the ‘Guide’ from Khunu Lama Rinpoche Tenzin Gyaltsen and ‘Stages of Meditation’ from the Sakya Abbot Sangye Tenzin here in Bodhgaya. Sangye Tenzin told me that he heard it when he was on pilgrimage to Samye from a Lama who sat on the throne that Shantarakshita had used. Transforming the mind on the basis of these teachings depends on reading and thinking about them again and again. This is why I asked the organizers to provided copies of these books.”

His Holiness reminded the crowd that all 7 billion human beings alive today were born the same way and will die the same way. We are all subject to negative emotions and need to develop love and compassion because we all want happiness. He stressed that whether you have happiness or suffering depends on whether you discipline your mind. This is what differentiates Buddhism from other religious traditions. 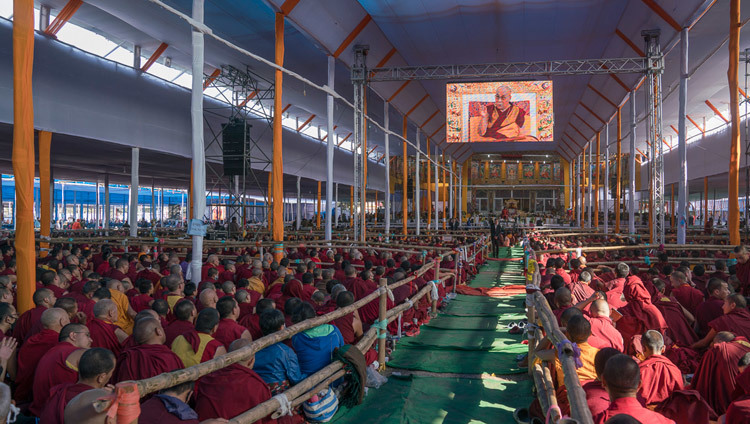 He observed that many problems we face in the world today are of our own making because we insist on highlighting divisions of nationality, race, faith, social background and so on. These differences exist, he conceded, but they are of secondary importance. He said we need to cultivate an unbiased sense of compassion, not affected by attachment that is capable of seeing that even our enemy deserves happiness.

“Education these days tends to focus on material goals. We seek sensory gratification in music or good things to look at, taste and touch. We may enjoy watching a game of sport, but once it ends the joy is over. What we really need is happiness that is rooted in the power of the mind. To achieve it we need to understand the workings of the mind and emotions, which we can discover in ancient Indian knowledge. Suffering arises as a result of an unruly mind and one of the ways to tame it is to develop love and compassion.”

His Holiness repeated what he often says, that he thinks of himself as just one among 7 billions human beings. He said that to think of yourself as special is to set yourself apart, to create a barrier which will only leave you lonely. On the other hand if you smile, others tend to smile back.

“As a Buddhist monk,” His Holiness remarked, “I remember I’m a monk even in my dreams. Practice of the teachings has helped me and I am convinced that if people are sincere about it, they can really benefit from their spiritual practice. Despite philosophical differences all religious traditions convey a common message about the importance of cultivating love and compassion. And in India we find a long-standing tradition of religious traditions living alongside each other in harmony.

“As a Tibetan, although I retired from political affairs in 2011, I’m concerned about keeping Tibet’s language, religion and culture alive, as well as protecting the country’s natural environment. Today, the Tibetan language is the medium best suited to accurately rendering the nuances of Buddhist philosophy.” 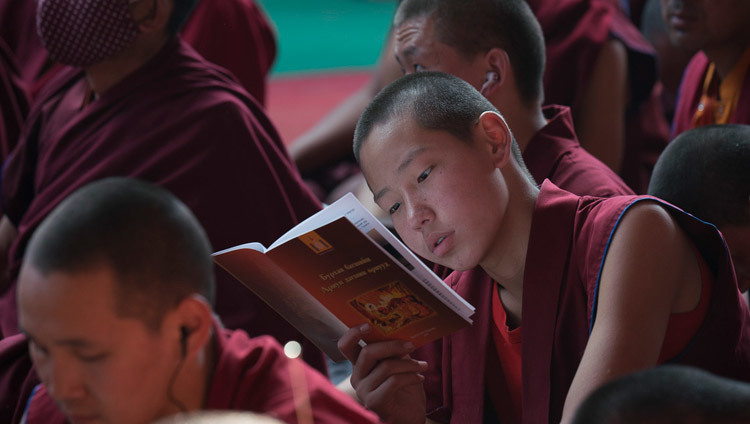 As he began to read from ‘Stages of Meditation’. His Holiness recalled that there were early contacts with Buddhism during the time of Songtsen Gampo, but it was Trisong Detsen who invited Shantarakshita to Tibet. He readily responded. Guru Padmasambhava was enlisted to overcome obstacles to the establishment of Buddhism, a project that involved all three—Abbot, Adept and Emperor.

Samye Monastery incorporated departments of concentration, translation and so on. In the meditation department were Chinese monks who asserted that you could attain enlightenment through non-conceptual meditation without need to study or analyse the teachings. Kamalashila was invited to challenge this position and composed ‘Stages of Meditation’ in Tibet as a result. His Holiness announced that in addition to giving some explanation he wants to give a complete reading transmission of the two texts he is reading.

He touched on a way of presenting the teachings that involves first explaining the Two Truths. Based on them the Four Noble Truths are explained and appreciating them gives support to taking refuge in the Three Jewels.

His Holiness read the first verses of ‘Guide to the Bodhisattva’s Way of Life’ before switching to the introductory verses of Chapter Nine, the Wisdom chapter which clarify that the teaching that really leads to the attainment of enlightenment is the Two Truths. This is because the main obstruction to enlightenment is the misconception about true existence. Understanding that things do not exist the way they appear undermines this.

He mentioned the illustration of the ‘Wheel of Life, often found on temple verandas, and the depiction in the centre of ignorance, desire and hatred as a pig, rooster and snake. Around the outer rim are the twelve links of dependent arising, starting with ignorance, depicted as a blind man. He chuckled and suggested how helpful it would be if temple caretakers were able to explain these things.

“Things do not exist the way they appear—acquaint the mind with this.”

His Holiness switched back to reading Chapter One and remarked that if you cultivate the awakening mind and an understanding of emptiness you can guarantee a good rebirth in your next life. He cited a verse from Chapter Eight:

If you don't actually exchange your happiness
For the, sufferings of others,
Not only will you not attain the state of Buddhahood
But even in cyclic existence you will have no joy.

His final remarks were:

“Read the book. Think about what it says and apply it to your life. Do you agree with me?”
The teaching will continue tomorrow.