Talking about Compassion and Ethics to Students at ITAHAAS February 6, 2017

New Delhi, India - This morning His Holiness the Dalai Lama drove to the Convent of Jesus and Mary near the Bangla Sahib Gurudwara in New Delhi. He was received on arrival by Smita Vats founder and director of the Indian Traditions Heritage Society (ITAHAAS), an organization born out of a concern that children are becoming increasingly alienated from their traditions and heritage. As he walked to the covered stage in the Convent grounds, the way was lined by smiling school-children in school uniform waving the Indian tricolour. Ms Vats offered His Holiness a heartfelt welcome, remarking too that the skies had cleared and the sun had come out. She told him how much the 1300 students from 80 schools and ITAHAAS delegates were looking forward to listening to him. 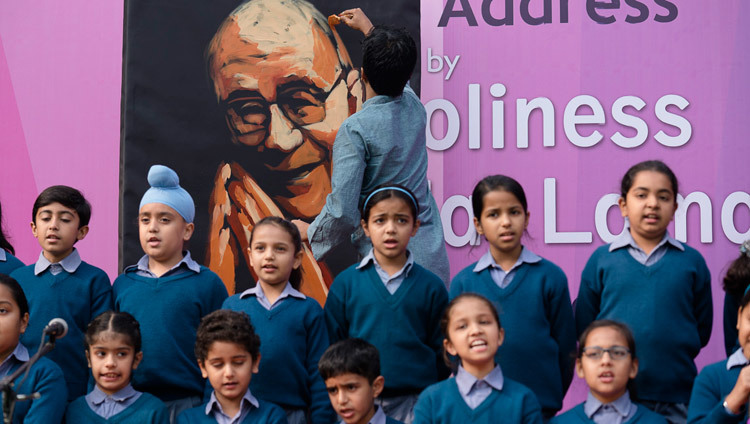 “Whenever I speak to groups of people like you I always begin by greeting them as brothers and sisters and there are reasons for this. We are all human beings, part of the population of 7 billion alive today. The way we are born and affectionately nurtured by our mothers is the same. This is how we survive. Later, we all die the same way. We are physically, mentally and emotionally the same. We share the same kind of feelings of pleasure and pain. And yet we neglect the oneness of human beings and forget that others are our brothers and sisters. Instead we emphasise the secondary differences between us of colour, race, faith and nationality. We view each other in terms of ‘us’ and ‘them’, which inevitably provokes conflict.

“Many of the problems we face can only be solved by recognising that others want to live a happy life just as we do. They too thrive when they receive love and affection. Scientists have established that in the early weeks of life, a mother’s physical touch is necessary for the proper growth of the brain. Children who receive the maximum affection at this time grow up to be happy and secure. Scientists have also found that constant anger and fear undermine our immune system, while compassion strengthens it.” 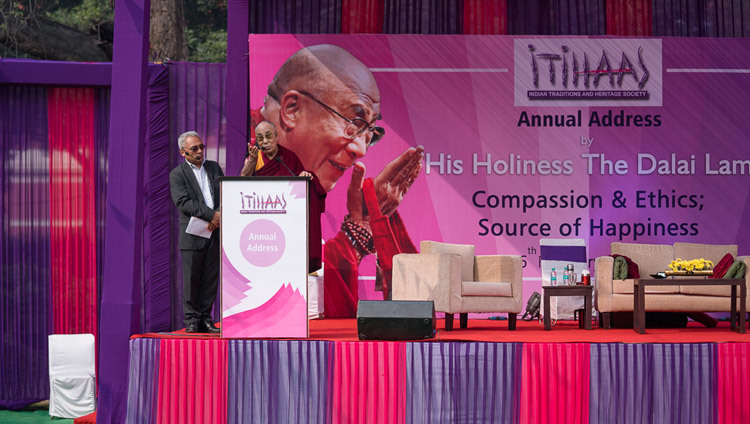 His Holiness gave an example of how we might regard each other as fellow human beings when he described someone lost in a remote and isolated place. If they then stumble across another person they regard them just as a fellow human being with no concern for their nationality, faith or race. He said this is the kind of attitude we need all the time. In the face of overwhelming problems like the growing gap between rich and poor, the natural disasters provoked by climate change and the increases in human population, as well as man-made difficulties like corruption and discrimination on the basis of caste, we need to work together.
He appealed to the young people before him, who all belong to the generation of the 21st century, to be determined to create a happier, more peaceful world. He called on them to use their intelligence in a positive way, to cultivate the warm-heartedness that can be the catalyst of constructive change. He observed that when the education system encourages only materialistic goals with little concern for universal human values, cultivating warm-heartedness can make all the difference.

His Holiness’s answers to students’ questions touched on whether an angry response brings any benefit. He suggested that if you analyse a challenge and find you can cope with it there’s no need to be angry and if you can’t do anything about it, giving in to anger will only make things worse. He mentioned in a similar vein that resorting to a use of force does not provide a lasting solution. He confirmed that establishing peace in the world is dependent on our having inner peace ourselves. He remarked that a family whose members are at peace with themselves, who trust and feel affection for one another will be happy even if they are not materially well off. 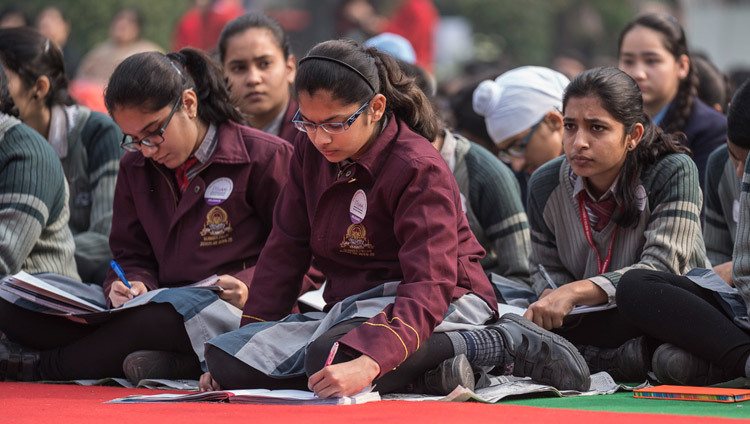 He told a student who questioned what effect one young individual can have on the world that he recognised the feeling. However, he pointed out that someone like Mahatma Gandhi could have felt the same way and yet by acting with quiet courage and confidence he had contributed significantly to India’s struggle for freedom. Once again His Holiness reiterated his admiration for India’s long established tradition of pluralism and inter-religious harmony.

Asked by another student what message she could take home with her, His Holiness said “Be a kind and compassionate person. This is the inner beauty that is a key factor to making a better world.”

There were expressions of thanks as the talk came to an end. Scarves were exchanged. As he left the stage His Holiness signed the portrait created earlier and congratulated the artist.

After lunch, before an audience of 150, His Holiness gave an extensive interview to Shekhar Gupta as part of his Off the Cuff series. They talked about how His Holiness stays calm. He told Gupta that he is a student of the Nalanda Tradition, who consistently applies analysis to the situation presented to him and his emotional response to it. He said he always tries to see things from a wider perspective and to remain optimistic. Their discussions touched several times on the existence of God. His Holiness declared that while he follows the path of a Buddhist monk, he recognises that belief in a loving creator God is very powerful. 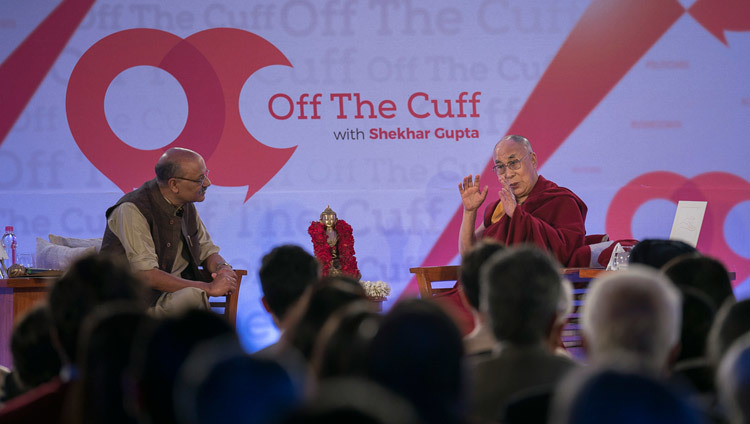 His Holiness repeated his sense that India today has a special opportunity to combine the benefits of science and technology with the knowledge and insight of ancient India. He explained how the 8th century Tibetan Emperor Trisong Detsen, despite close relations with China, explicitly turned to Indian sources to learn about Buddhism. He invited the preeminent scholar of the day, Shantarakshita, to visit Tibet, which he did with far-reaching effects. Tibetans’ having kept the Nalanda Tradition alive and brought it back to India can be attributed directly to the way Shantarakshita established Buddhism in Tibet in the first place.

When, after Shekhar Gupta had called an end to the conversation, a woman persisted in asking why Buddhism teaches that a woman cannot attain nirvana, His Holiness replied that the Buddha accorded equal opportunities for men and women to practice, ordaining men as Bhikshus and women as Bhikshunis. He mentioned that although nuns had not studied extensively in the past, 40 years ago he had encouraged them to do so. Just recently, he said, this had borne fruit when he awarded the first 20 nuns with the highest doctorates in acknowledgement of their scholarly achievements.

Gupta wound up the interview expressing gratitude for all that His Holiness had had to say and reserving his particular admiration for the fact that he is unique among spiritual figures in being prepared sometimes to answer, “I don’t know.”