Dirang, Arunachal Pradesh, India - When His Holiness the Dalai Lama came down to the courtyard of Thubchok Gatsel Ling Monastery this morning he spoke first to a group of young monks and observed them debate. He then also spoke briefly to a group of adult lay people who have formed their own study group. He praised their efforts and urged them to continue.  Before leaving, he unveiled the foundation stone for a new assembly hall. 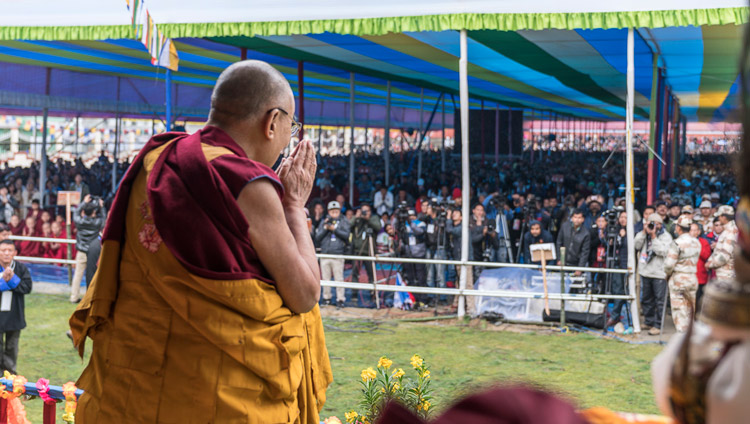 His Holiness drove the short distance to the Bomdila Buddha Park further up the hill. After saluting the crowd, estimated to number 15,000, he seated himself on the throne. Explaining that he had to spend a short time preparing for the White Tara Long-Life Empowerment he was going to give, he requested the audience to recite Tara mantras while he did so.

“We are gathered today for you to listen to a teaching of the Buddha,” he began. “A long time ago people worshipped the sun and moon in the belief that they gave them protection. Later, religions emerged that also incorporated a philosophical point of view. The common intention of almost all these religions is to help people become better human beings. They all teach love and compassion, tolerance and forgiveness, and have long benefited humanity.

“All the world’s major religions flourish in India. These include indigenous traditions like the Samkhya, Mimamsa and Vedanta schools, Jainism, Buddhism and Sikhism as well as traditions originating elsewhere. They live here harmoniously. They all teach love and compassion, which accords with basic human nature and is what humanity needs. We are social animals and without a sense of compassion for each other we won’t be happy. Whether we are religious or not there is a need for love and compassion in the world. 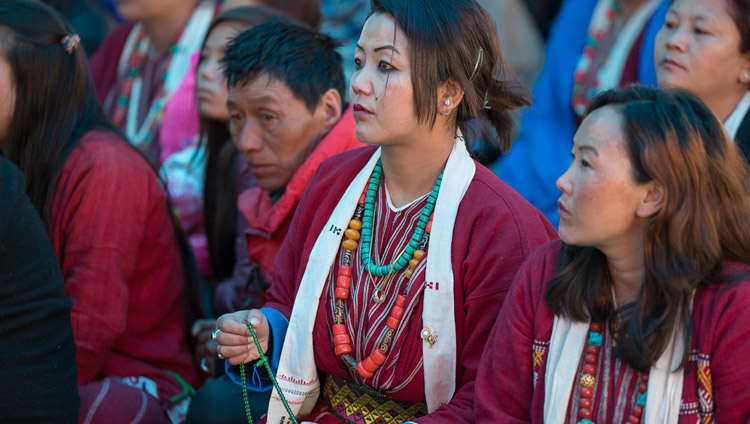 “I’m going to talk about what the Buddha taught, which can be differentiated from other traditions by its philosophical point of view. Some traditions believe in a creator god. Others like Jainism, non-theistic Samkhya and Buddhism don’t assert a creator, they teach that whatever pain and pleasure we experience is a result of actions we have done, rather than anything to do with god. What differentiates Buddhism further is its assertion of selflessness. This is not a denial of any self at all, a self functions, but selflessness means there is no independent, autonomous, permanent entity separate from our body and mind.

“I am a Buddhist and I have studied Buddhist philosophy, which I admire, but I can’t say it’s the best, that’s a question of what benefits an individual most. It’s like not being able to say that one medicine is suitable for all occasions. And although all food should be nourishing, it doesn’t make sense to say this or that is the best food. The Buddha gave different explanations according to the dispositions of the people listening to him. According to the 'The Extensive Sport Sutra' (Lalitavistara Sutra) he said to himself:

Profound and peaceful, free from complexity, uncompounded luminosity-
I have found a nectar-like Dharma.
Yet if I were to teach it, no-one would understand,
So I shall remain silent here in the forest.

His Holiness explained that at the time few were likely to be amenable to the idea of selflessness, although the Buddha thought his five previous companions might come round to it. He taught them the Four Noble Truths, the truth of suffering, its cause, cessation and path. He further elaborated four characteristics of each of the Noble Truths. 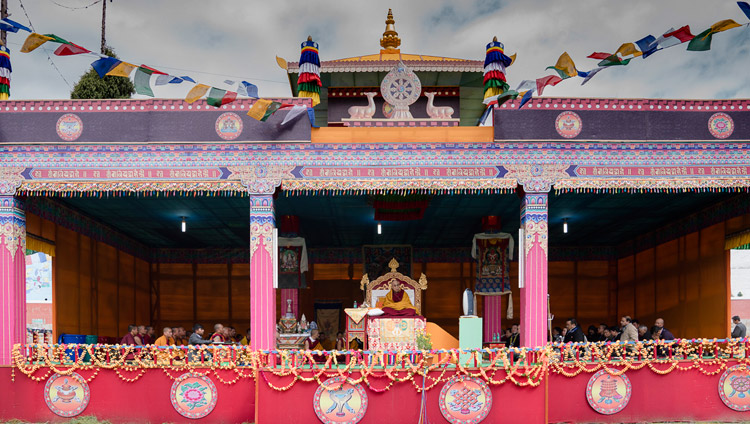 Clarifying that the Four Noble Truths reveal the law of causality—suffering arises from its cause, but the path also gives rise to cessation—His Holiness noted that the first two Noble Truths show how suffering comes about, while the second two show to overcome it and leave the cycle of existence. He quoted the Buddha as saying, ‘Suffering must be known, the origin must be overcome, liberation must be achieved and the path must be cultivated.’

His Holiness made clear that along with the Four Noble Truths the Buddha explained the 37 factors aligned with enlightenment, which include the 4 foundations of mindfulness, the 4 supreme endeavours, the 4 miraculous feet, the 5 strengths, the 5 faculties, 7 means to enlightenment and the Noble Eightfold Path. These are all related to the first turning of the wheel of Dharma. He added that during the second turning of the wheel, the Buddha taught the Perfection of Wisdom.

“In order to understand cessation properly, you need to understand what ignorance is and how to overcome it—that’s where an understanding of emptiness comes in. One aspect of the third turning of the wheel is an interpretation of what was explained in the second turning with regard to the three natures and how they are defined: imputed nature has no intrinsic existence; dependent nature is not self-created and ultimate nature has no ultimate, independent existence. And with regard to secret mantra or Vajrayana, the ‘Tathagata-garbha Sutra’ teaches that the mind is primordially pure. All aspects of mind are pervaded by pristine awareness. We use this primordial mind and transform it when we visualize ourselves arising as a deity.”

As he began to grant the White Tara Long-Life Empowerment, His Holiness asked how Buddhas help beings and made clear that it’s by teaching about reality as it is to dispel ignorance. He referred to the depiction of the Wheel of Life pointing out that at the hub ignorance is shown as a pig which gives rise to desire, the rooster, and hatred, the snake. He also mentioned that in the outer rim the twelve links of dependent arising are depicted beginning again with ignorance portrayed as an elderly blind person.

During the Long-Life Empowerment His Holiness led a ceremony for generating the awakening mind of bodhichitta. At the end he urged everyone in attendance whether they were lay people or monastics to study as well as they can. 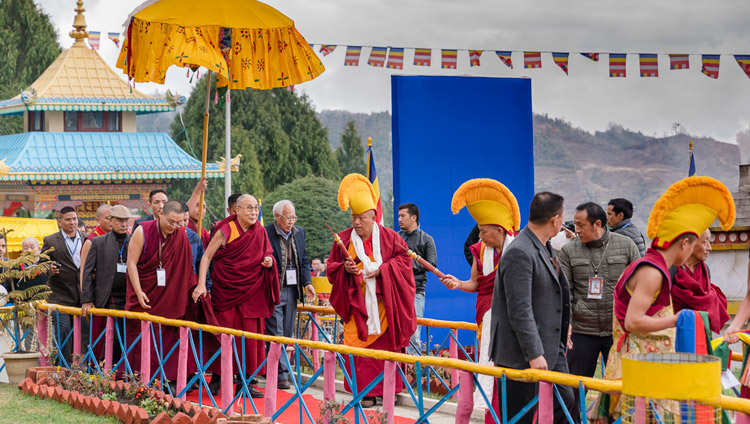 His Holiness drove to the nearby Gontse Rabgyeling Monastery, where the last stretch of the road was lined by small boys who are students there. He was given a traditional welcome and, after paying his respects before the various sacred images, sat on a chair. The abbot read a report that stated that the monastery as it was in Tibet dated back to the time of the 5th Dalai Lama. It was re-established in Bomdila in 1965 and, because of its historical link to Drepung Loselling Monastery, four Geshes were invited from there to teach. It has established a school to provide modern education as well as monastic training. The abbot ended with a prayer that His Holiness visit again and again and that the unmistaken reincarnation of the late Tsona Rinpoche be found.

“The late Tsona Rinpoche was a brilliant monk when he was young. He was clever and a good scholar and a misfortune occurred in relation to his untimely death. He started building this monastery and it’s to your credit that you have completed it. I’m glad to know that you are making efforts to provide opportunities for study. For some time now I have encouraged ritual monasteries to incorporate such opportunities to study and nunneries too. Consequently, twenty nuns were recently awarded Geshe-ma degrees.”

After he had watched a demonstration of young monks’ prowess in debate, the monastery invited His Holiness to lunch. 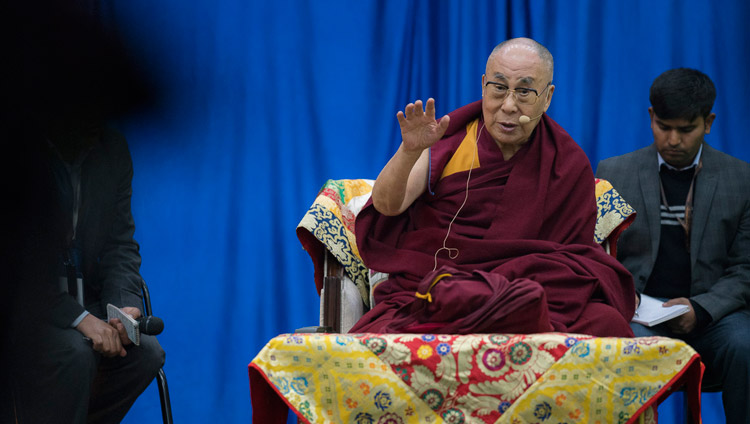 In the High School Auditorium, after lunch, His Holiness spoke to a gathering of 300 of Bomdila’s great and the good. He told them about his own commitments, that wherever he goes he talks about the urgent need for human values, an appreciation of the oneness of humanity, and concern for others’ well-being. He also mentioned his dedication to promoting religious harmony. As a Tibetan, despite retiring completely from any political responsibility, he is concerned to keep Tibetan culture alive and see the Tibetan environment better protected. Finally, after 58 years living in India he seeks to encourage Indians today to take a greater interest in what is to be learned from ancient Indian knowledge, particularly understanding of the workings of the mind and emotions.

His Holiness answered questions about the lack of punctuation marks in Tibetan language and whether Buddhists who are taught not to harm other creatures are vegetarian. He quoted a Sri Lankan monk who had told him that, because they depend on begging for their livelihood, Buddhist monks are neither vegetarian nor non-vegetarian. Questioned about being more effective in education he suggested that expressing affection for and genuine interest in their students rather than teaching merely mechanically is a good start.

Leaving Bomdila by road, His Holiness drove to Dirang which lies in a substantially lower valley. Once again genial people proffering scarves and incense lined the route in villages along the way. Arriving at Thupsang Dhargyeling Monastery on a hill above the town he was given a traditional welcome. He cut a ribbon and pushed open the temple doors by way of inauguration and once inside unveiled a plaque to the same effect.

Tomorrow His Holiness will take part in a more formal inauguration program in the morning and will teach the ‘Eight Verses for Training the Mind’ followed by an Avalokiteshvara permission in the afternoon.