Bodhgaya, Bihar, India - By the end of the Kalachakra self-generation and preparatory rituals this morning, construction of the sand mandala was complete. Thamthog Rinpoche, deputising for the Vajra Master, placed the ten phurbas and ten vases containing the water that will be employed in the empowerment around the mandala perimeter. 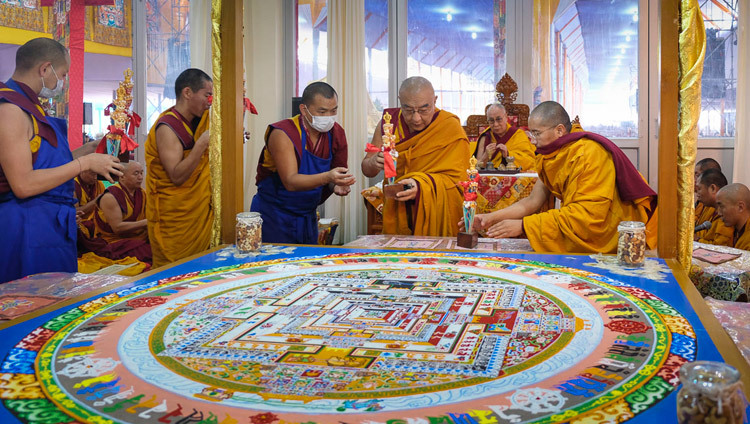 Returning to the Kalachakra Temple after lunch His Holiness walked to the edges of the stage to wave and catch the eyes of people in the audience in each direction. Standing on the throne, from where more people at the back could see him, he waved again. Once he had taken his seat, the group of school children who the other day had regaled the audience with their charming chanting of the ‘Heart Sutra’ in Sanskrit did so again. They were followed by a mixed group of Vietnamese, many of whom, His Holiness remarked, “are refugees like us”.

He noted that the Buddha’s teachings had spread throughout Asia and yet for too long there had been little connection between Buddhist communities. Now, it has become easier to meet and get to know one another.

“With the Buddhists of Burma, Thailand and Sri Lanka we have the Vinaya in common, and with the people who follow the Sanskrit tradition, the Chinese, Koreans, Japanese and Vietnamese, we share the Perfection of Wisdom teachings. As followers of the same teacher we should share and compare our experiences. Although I had visited several cities in China and met venerable old monks, it wasn’t until I went to Singapore in the 1960s that I heard the ‘Heart Sutra’ in Chinese for the first time.”

Recalling the discussions of causality in ‘Stages of Meditation’, His Holiness noted that the attainment of enlightenment and the achievement of the Form and Truth Bodies depend on the collections of merit and wisdom. Wisdom involves an understanding of selflessness, which involves learning and reflection to gain conviction and reinforcing experience in meditation. Turning to the ‘Guide to the Bodhisattva’s Way of Life’, he reminded his listeners that the chapter they were reading, dealing with meditation, had discussed the disadvantages of a self-cherishing attitude. It says, in short, that self-cherishing only brings trouble. One way to counter this is to dedicate yourself to the development of altruism. 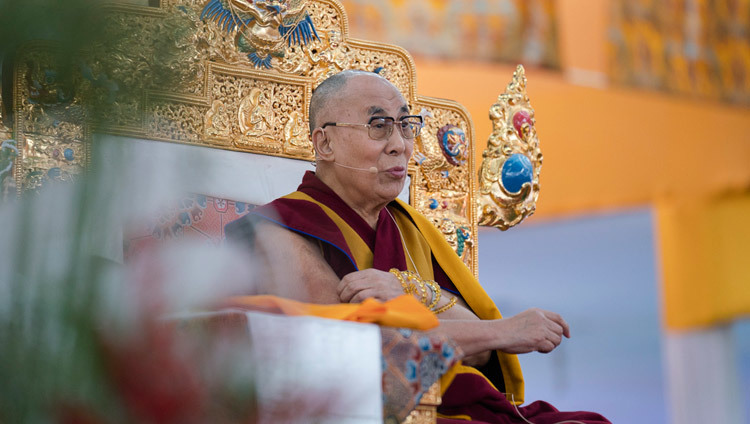 After briskly reading through to the end of Chapter Eight, His Holiness began to read rapidly through Chapter Nine - Wisdom, which presents a survey and rebuttal of the views of various Buddhist and non-Buddhist schools of thought from a Madhyamaka or Middle Way point of view. It begins with observation that suffering is rooted in ignorance and introduces the difference between the views of yogis, those who yoke the mind to an understanding of reality, and common people who conceive functional things as truly existent.

Having completed Chapter Nine, His Holiness turned his attention to reading the remainder of the ‘Stages of Meditation’. He commended the text for giving a valuable appraisal of how to progress through the path, employing wisdom and method in due order. He observed that the colophon to the first of the three volumes of ‘Stages of Meditation’, and this is the second, mentions that its composition was specifically requested by the Tibetan Emperor, Trisong Detsen.

To complete his transmission of the two texts, which means his reading of the entire text as it was read to him by someone participating in a living lineage going back to the author, His Holiness read Chapter Ten  - Dedication - from the ‘Guide’.

The first line of verse 44, “May nuns be materially sufficient, ...” prompted His Holiness to explain that while it is necessary to have a living lineage of Fully Ordained Nuns—Bhikshunis, to establish such a lineage anew requires a consensus among Vinaya masters.

“We have to follow the proper procedures. We have to find a way to give a pure and undisputed vow. So far, we have not managed to achieve the necessary consensus, which is not something that can be decreed by one individual. 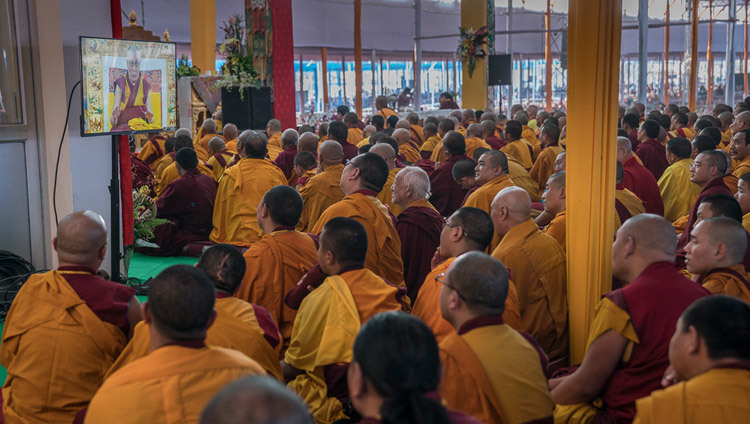 “What I have been able to do, however, is to encourage nuns to study. They have done so for almost twenty years and we recently held a grand ceremony in South India to award the first twenty nuns who have qualified Geshe-ma degrees. Where are they? Are they here?

“I have heard that there is a living tradition of giving Bhikshuni ordination in Vietnam, but some Chinese Abbots have raised misgivings about it. This remains to be resolved. In the meantime, I’m sure there will be more Geshe-mas in the future.”

His Holiness remarked that understanding the teachings of the Buddha requires intelligence, which is why Manjushri is invoked in the dedication chapter. He recommended those listening to recite the common Manjushri prayer known as ‘Gang-lo-ma’, which begins, ‘You, whose intelligence shines forth as the sun, ...’ and a rosary of Manjushri’s mantra every day.

Reading the colophon to the ‘Guide’—‘The text was translated, edited, and finalized in Tibetan by the Indian scholar Sarvajnadeva and the monk, translator, and editor Kawa Peltsek. Later it was revised by the Indian scholar Dharmashribhadra and the Tibetan monks, translators and editors, Rinchen Zangpo and Shakya Lodrö. Still later, it was again revised and finalized by the Indian scholar Sumatikirti and the monk, translator, and editor Ngok Loden Sherab’, prompted His Holiness to remark that it was another of Shantarakshita’s gifts to Tibet to insist that translations into Tibetan of Indian Buddhist literature should be done by Indians and Tibetans working together. The result was translations that many scholars today admire as of a quality comparable to the Sanskrit originals.

“I have given the transmission of these two treatises,” His Holiness said, “you have the book, keep it with you and read it again and again. This completes the Preliminary teachings. After a break tomorrow, we’ll begin the empowerment the following day, which will involve entering the mandala and receiving the eleven vase empowerments and the high and higher empowerments. I had also thought about giving a Long Life empowerment at the end, but I’ve decided instead to give a permission of Avalokiteshvara.”

Before leaving the throne, His Holiness spoke of the significance of taking advantage of being here together to get to know one another better in an ecumenical spirit. He said that in the past such opportunities were rare, but today can be easily achieved. He asserted that the Dolgyal people’s warning that if Gelukpas have even a Nyingma text in their homes, Gyalpo Dolgyal will punish them, is no good at all. He stated clearly that all Tibetan Buddhist traditions have roots in the Nalanda tradition and encouraged the establishment of harmony and friendship among them.