Bodhgaya, Bihar, India - The Kalachakra preparatory rituals went on as before this morning while four monks continued their steady work to create the sand mandala. The basic shape of the palace is now visible. 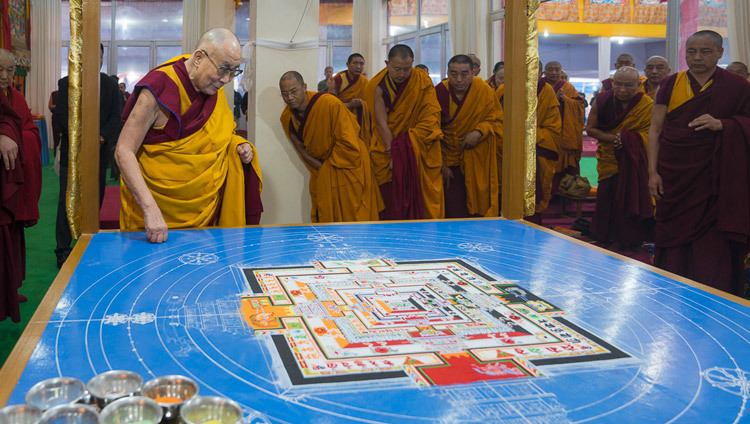 The tradition of making such sand mandala derives entirely from India and is another example of a tradition that survived in Tibet while vanishing from its land of origin. His Holiness the Dalai Lama took part in the morning’s rituals and closely inspected the work on the mandala when they were done.

His Holiness returned to the Kalachakra Temple soon after lunch to welcome Swami Chidanand Sarasvati and representatives of several religious traditions to an impromptu inter-faith meeting. They had taken part yesterday with Prime Minister Narendra Modi and Chief Minister Nitish Kumar in ceremonies in Patna to celebrate the birth there 350 years ago of the tenth Sikh Guru, Gobind Singh. They came today to greet His Holiness and participants in the Kalachakra Empowerment and to celebrate inter-faith understanding.

Chief Jathedar of the Akal Takht in Amritsar, Giani Gurbachan Singh was invited to speak first. He chanted a prayer, greeted his fellow guests, and gave a short homily praising His Holiness as a symbol of compassion and love. Maulana Hasanur Rahman came next and extended a welcome to all who have come to Bodhgaya. He mentioned that in Islam all beings are regarded as sons and daughters of one family.

Jain Acharya Lokesh Muni paid homage to the Bhagawan and the Dharma, greeted His Holiness, other guests and Kalachakra disciples. He described his companions as an interfaith group and praised His Holiness as an elder among interfaith activists. Swami Chidanand Saraswati chanted elaborately and praised His Holiness as a renowned spiritual master, an ocean of happiness with an ocean of faith before him. He reported a conversation in which His Holiness had told him of the need for human values, for respect for all religious traditions and sharing the idea that we all belong to one human family. 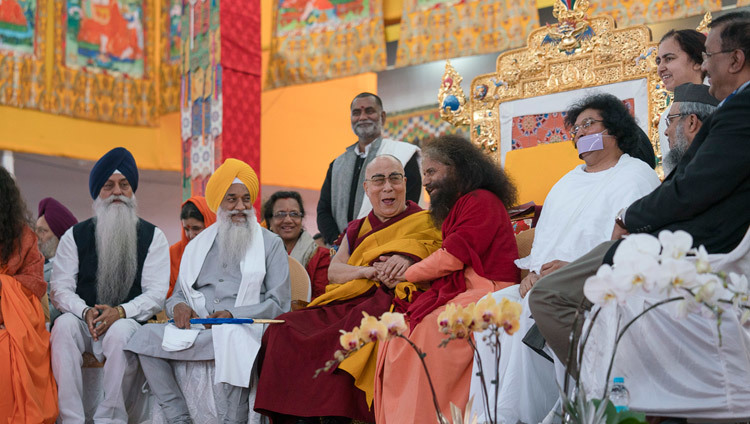 When His Holiness was requested to speak, he did so in Tibetan and Ven Samdhong Rinpoche translated what he said into pure Hindi. He said:

“Today, we’re gathered in this place made sacred by the Buddha’s having attained enlightenment here. When I was in Patna last week, the Chief Minister told me of the forthcoming event to observe the birth of Guru Gobind Singh’s. The participants in this interfaith meeting have all spoken eloquently about the importance of compassion. Our various religious traditions have their philosophical differences, but convey a common message of love and compassion.

MP Jagjit Singh Dardi released a specially minted celebratory coin and Sadhvi Bhagawati Saraswati made an appeal on behalf of Wash, a movement to achieve a cleaner India, with especial concern for clean water.

The delegates left the stage, His Holiness took his seat on the throne and the Preliminary Teachings program resumed. The Mangala Sutta was recited again in Pali, following which a group of Chinese monastics chanted the Heart Sutra in Chinese. Before His Holiness began to teach, representatives of the Tibetan Golok Community both inside Tibet and outside, performed a brief Long-Life Offering to him.

“Yesterday, I gave quite a detailed introduction,” His Holiness told the crowd, “I won’t repeat that today. We are reading the ‘Guide to the Bodhisattva’s Way of Life’.”

He read briskly through the verses, stopping here and there to make a remark. The first was to emphasize the importance of motivation and that if you are motivated by the awakening mind intent on attaining enlightenment for all sentient beings, the positive results will be unending. There is a distinction made between two kinds of awakening mind, that which aspires and that which ventures to do something.

As an example of the value of compassion and companionship, His Holiness mentioned a scientific experiment with two rats that had the same kind of injury. What investigators found was that the rat that had a solicitous companion healed and recovered quicker than the one left on its own.

A reference at the end of Chapter Three to gods and titans prompted His Holiness to talk about his sense of misgivings about a line in a longevity ritual that mentions the lifespan snatched away by such beings and asks for it back. He said, “We claim to invite all beings as our guests, shouldn’t we let them keep it?”

A key verse points out that our real and most damaging enemies are not beings outside us but the disturbing emotions we harbour within. These are the enemies with whom we should have no patience. 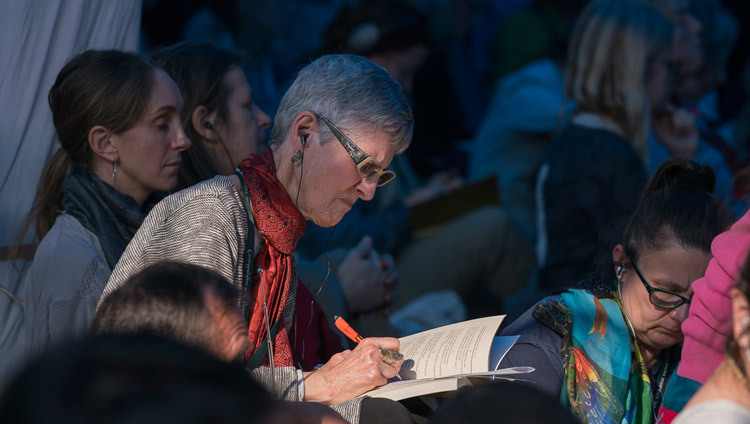 His Holiness remarked that it has become common to refer, for example, to ‘Muslim terrorists’, which he considers a mistake. He said the label is wrong. People who engage in terrorism are simply terrorists. Their actions completely contradict religious teachings, so it is inappropriate to associate them with a religious label.

In an extensive discussion of the Four Noble Truths His Holiness mentioned that there was an implicit reference to selflessness when the Buddha taught them during the First Turning of the Wheel of Dharma. During the Second Turning of the Wheel, on Vulture’s Peak outside Rajgir, he clearly taught that things have no intrinsic existence—they are empty of intrinsic existence.

Two thirds of the way through Chapter Five, ‘Guarding Alertness’, His Holiness stopped for the day and will resume tomorrow.