Third and Final Day of the Kalachakra Empowerment January 13, 2017

Bodhgaya, Bihar, India - Since His Holiness the Dalai Lama arrived in Bodhgaya more than two weeks ago, the misty skies have cleared and the sun has come out, but there remains a chill in the air. As he did yesterday, His Holiness came early to the Kalachakra Temple to perform the preparatory rites for the empowerment, which took him four hours. 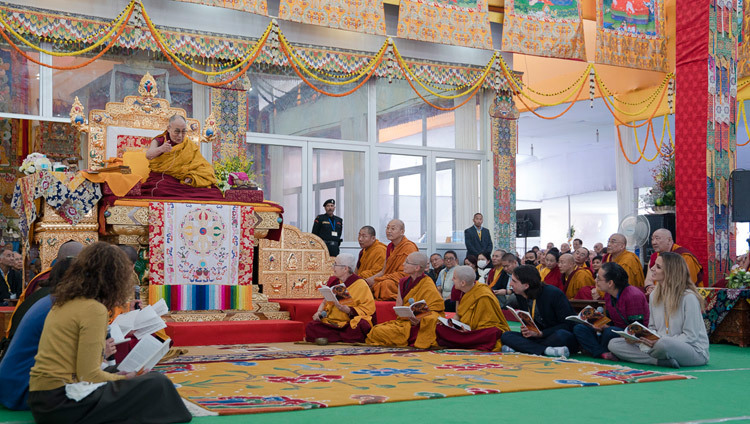 After a brisk lunch he walked out onto the stage and, not content with greeting the audience from the edge as he has done previously, he walked down the ramps on each side to smile and wave. There were cheers as well as applause from some sections of the crowd.

Once His Holiness was seated on the throne, children from the Maitreya School run by Root Institute for the third time chanted the ‘Heart Sutra’ in Sanskrit. They were followed by a group of monks, nuns and lay-people, who recited it again in Spanish. His Holiness remarked that this was the first recitation in Spanish at such a gathering. Spotting three Thai monks in the crowd, he called them up to see him. They presented him with relics in a small glass reliquary.

I prostrate to Gautama
Who, through compassion,
Taught the exalted Dharma,
Which leads to the relinquishing of all views.

“The teachings of all religious traditions give rise to happiness,” His Holiness remarked, “since all of them teach about love and compassion and not doing harm to others. They have explanations of patience and forgiveness in common. There’s no pleasure in thinking only of yourself to the neglect of others. Wouldn’t eating a plate of sumptuous food in front of a group of people who were starving make you uncomfortable?

“When we harm other beings, deceive and lie to them, we are driven by disturbing emotions. Acting out of selfish motives in this way is the cause of our own ruin. While sitting comfortably on your cushion it is easy to say, ‘May all beings be free from suffering’, but you will only make a difference if you actually do something for them. You all came to Bodhgaya for the Kalachakra Empowerment, but what you need to take home is a warm heart.

“Bodhichitta is an intelligent way to motivate ourselves to be of benefit to others. To explain this I taught the ‘Guide to the Bodhisattva’s Way of Life—read it and think about what you have understood. It will bring you peace of mind, reduce your anxiety and bring you happiness in this life and the next.”

His Holiness mentioned that the Buddhism of Tibet is a complete presentation of the Buddha’s teachings and includes the practice of tantra. He said that if we follow what the Buddha taught in the three Turnings of the Wheel of Dharma, we’ll gather the causes of omniscience and overcome the obscurations to knowledge. One of the aspects of Tantra is to learn to deal with wisdom while cultivating the clarity and awareness of the mind of clear light. His Holiness remarked that Kalachakra is a particularly extensive and subtle in this way.

“In giving the high and greatly high empowerments today I will be following the text composed by the 7th Dalai Lama, Kalsang Gyatso,” His Holiness announced. “I’ve done the self-generation, the front generation of the mind mandala, as well as making offerings to the deities.” 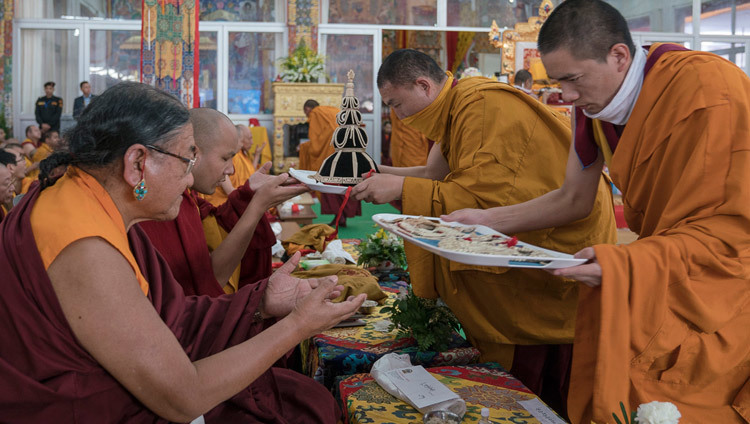 A group from the Assembly of Tibetan People’s Deputies made the mandala offering as His Holiness began to bestow the empowerments. When he reached the Vajra Master empowerment, he explained that it was given to qualify those who would work to preserve the Dharma, who evidently included the heads of the various Tibetan Buddhist traditions seated around him. However, he said, since there might be others who would take on such responsibilities elsewhere in the crowd, he would bestow the empowerment on everyone.

When he reached the end, he reminded the audience of what he had said at the beginning of the afternoon that the purpose of giving the empowerment was to give them something to take home in the form of a warm heart.

Kalon for Religious and Cultural Affairs, Ven Karma Gelek Yuthok made the final thanksgiving offering. Two dozen interpreters hurried forward from their translation booths backstage to offer scarves to His Holiness and receive his appreciation.

Tomorrow morning, instead of the traditional Long Life Empowerment, His Holiness will be giving an empowerment of Avalokiteshvara, which will be followed by the offering of a Long Life Ceremony to him. Lastly, the closing event of the Kalachakra Empowerment will be attended by Chief Minister of Bihar, Nitish Kumar.