Third Day of Teachings Preliminary to the Kalachakra Empowerment January 7, 2017

Bodhgaya, Bihar, India - His Holiness the Dalai Lama joined the preparatory rituals for the Kalachakra Empowerment again this morning, as he will every day until the Empowerment is complete. Construction of the mandala had made great progress. By this morning, as can be seen vividly on the video feed within the teaching grounds, the major part of the palace and its surroundings is complete. What remains is the chain of Sanskrit syllables that ring the outer rim. 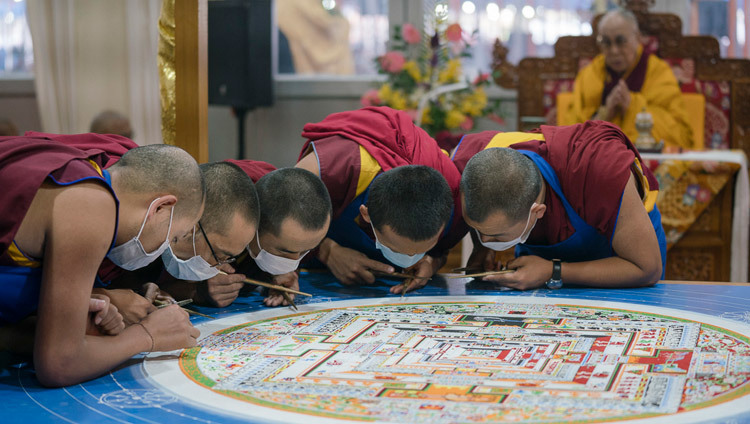 A substantial team of monks, primarily belonging to Namgyal Monastery, support His Holiness in preparing for the granting of the Kalachakra Empowerment. The experienced monks who sit with him and perform the self-generation and other rituals every day number about 25. They include the Abbot, Thamthog Rinpoche and former Abbot, Jado Rinpoche, two former Chant Masters in addition to the present incumbent. On this occasion, eight Jonangpa monks and four Mongolian monks have joined the team. Four monks are responsible for creating the sand mandala. They are supported by four assistants and co-ordinated by one supervisor. Seven monks are responsible for making all the necessary ritual cakes (tormas). There are two Ritual Masters and four personal attendants to His Holiness. In addition, six caretakers look after the thrones and so forth. There are also two kitchen attendants and eight young monks who serve tea.

Today, after the Pali recitation of the Mangala Sutta, the ‘Heart Sutra’ was recited in Vietnamese. Ganden Tri Rinpoche, Jetsun Lobsang Tenzin, offered the mandala and three representations of body, speech and mind of enlightenment.

“It was the Buddha who taught dependent arising,” His Holiness began. “And it’s more than 2500 years since he lived in India, yet his teaching continues to thrive. What’s more, what he taught is useful in day to day life. Although religion is generally thought of as something to do with faith and not subject to scrutiny, many people today, including scientists, are surprised to discover that the Buddha’s teachings comprise a science of the mind.

“I do not say Buddhism is best, nor that everyone should become a Buddhist. We have a variety of religious traditions suited to different people, much as we have different medicines appropriate for different ailments. Tibetans have followed Buddhism for generations, but in the West and elsewhere we find Jews, Christians and Muslims. That’s why I generally recommend that people stick to the religion they were born to.” 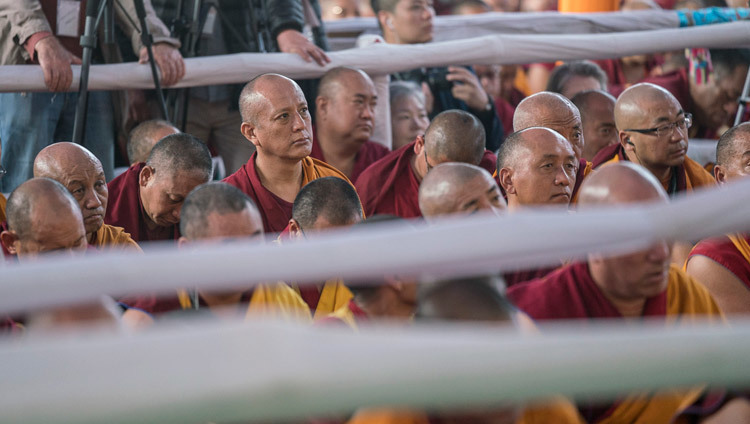 Alluding to the elimination of ignorance and the growth of wisdom, His Holiness drew an analogy with the break of day. As the sun rises, light gradually fills the sky until it is daylight. He suggested that following this pattern is to become a 21st century Buddhist. He stressed the importance of applying what you learn in practice.

His Holiness resumed his reading of Chapter five of ‘Guide to the Bodhisattva’s Way of Life’, remarking that to have good thoughts before you sleep tends to render your whole sleep positive. He rapidly completed that chapter and began Chapter Six, which deals with patience. The early verses make clear that we should not simply accept anger. Instead we should examine its negative consequences. We should also recognise that once anger has erupted it’s difficult to subdue so it is better to deal with it before if flares up. He also mentioned that when we are angry with someone, we should remember that not only do they not have any independent existence, but they are also subject to disturbing emotions.

The point was made that we cannot develop patience or apply the practice of equalizing and exchanging self with others in relation to the Buddhas we venerate—we can do so only in relation to suffering sentient beings. His Holiness remarked that there are today huge numbers of poor people in the world, a problem to which as human beings we have to find solutions. He highlighted a verse almost at the end of Chapter Six:

Why do I not see
That my future attainment of Buddhahood
As well as glory, renown and happiness in this very life
All come from pleasing sentient beings? 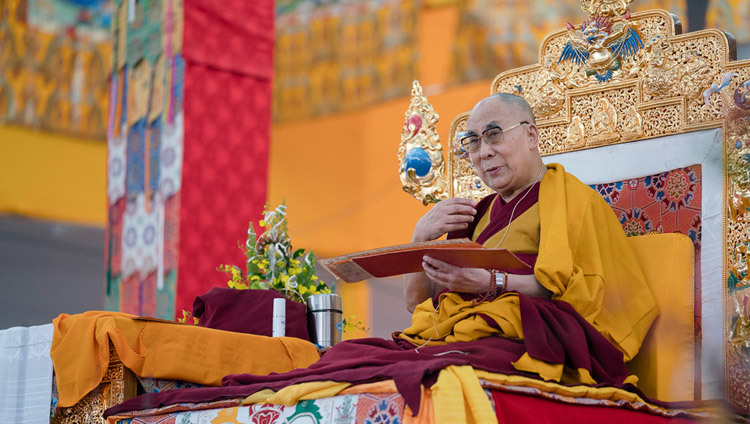 He resumed reading the ‘Stages of Meditation’ where he had previously left off, the instruction concerned developing a calmly abiding mind. His Holiness recommended focussing on the mind itself as soon as you wake up. He suggested washing your face and sitting in meditation when the mind is fresh and, thinking neither of past memories nor future plans, letting the mind rest naturally in the moment. If you do that, he said, a space will emerge and you will become aware that the nature of the mind is clarity and awareness. Focussing first on the breath can help reach this point.

The text states that all good qualities in the cycle of existence are the result of calm abiding and special insight. A single-pointed, calmly abiding mind cannot by itself overcome disturbing emotions, the addition of special insight is necessary to achieve that.

The advice that yogis should avoid meat prompted some discussion. His Holiness remarked that Atisha was vegetarian, but that a Sri Lankan monk had told him that Buddhist monks are neither vegetarian nor non-vegetarian because when they make their alms round they must accept whatever they are given. His Holiness recalled joining Thai monks on their alms round and how impressed he had been by their upholding of the Vinaya.

He explained, as he has before, that in the 60s he became a vegetarian for 20 months but fell severely ill, as a result of which his various physicians advised him to resume his former diet that sometimes included meat. However, he was pleased to explain that the common kitchens of the great monasteries and many schools in the Tibetan community are now vegetarian. He concluded that whether you are a vegetarian or not is a personal choice.

Another reference in the instructions to making prostrations prompted His Holiness to explain that although he used to regularly perform them, the trouble he has with his knees prevents him from doing so now. He went on to say that whereas he would previously have been getting up and down in connection with the creation of the sand mandala, since he has delegated the task to the Abbot and has been sitting still, he has noticed an improvement in the clarity of his visualizations. 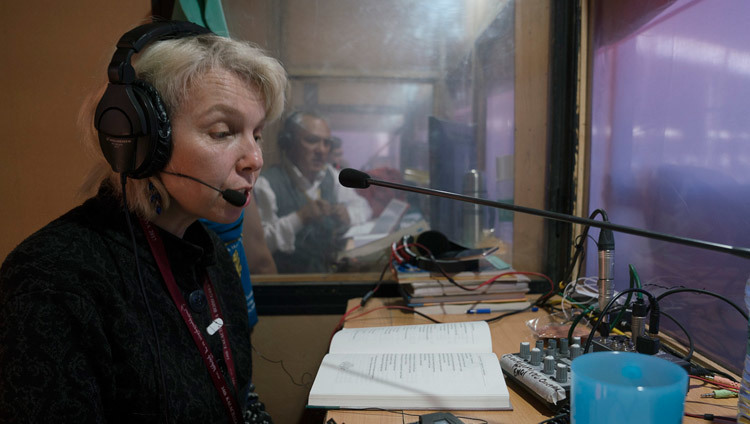 The text recommends the adoption of the Vairochana full or half lotus posture, which contributes to the clarity and concentration of meditation. His Holiness advised employing the nine round breathing exercise—inhaling through the right nostril and exhaling through the left three times, three times repeating the other way round and then inhaling and exhaling through both nostrils three times. A common object of meditation is a small image of the Buddha visualized the length of a prostration in front of you at the level of the brow. The mind must be vigilant and alert to distraction and dullness. Returning to the section describing calm abiding in the ‘Guide’ the main obstacle to it is described as excitement which distracts you from the chosen object.

The practice of equalizing and exchanging self and others is explained. All of us wish to be happy and none of us wants to suffer. The meditator is to imagine the billions of other sentient beings on one side and himself or herself on the other and evaluate who he should help. His Holiness remarked, “When I was young I had great admiration for the practice of bodhichitta, the awakening mind, but thought it was far too difficult to achieve. Since receiving Khunu Lama Rinpoche’s explanation of this book I have revised that view, but it will take hard work.”

Before ending the session His Holiness read the verses of Chapter Eight (140-154) in which the roles of self and other are reversed.

These preliminary teachings will be completed tomorrow. A dedicated audio-visual team with judiciously placed cameras and a backstage mixing desk have been streaming them on Facebook and Livestream in eight languages—English, Chinese, Tibetan, Vietnamese, Korean, Russian, Mongolian and Hindi. Until now there have been a combined 1,040,000 views.