Travelling up to Arunachal Pradesh and Arrival at Bomdila April 4, 2017

Bomdila, Arunachal Pradesh, India - Persistent stormy weather prompted a reassessment of His Holiness the Dalai Lama’s plans to travel to Arunachal Pradesh. This morning, instead of taking a helicopter to Tawang, he set off by road from Guwahati with Arunachal Chief Minister Pema Khandu escorting him. By and large the rain held off and the road was clear. Although the change of plan was only decided late last night word had spread. Military personnel marked the route at regular intervals. At villages along the way local people gathered, smiling, white scarves and incense in their hands to greet His Holiness as he passed. In many places they had also arranged the Chemar Chang-phu offering and set up a carpeted chair for him to sit on if he chose, as well as preparing incense offerings of billowing juniper smoke. Where His Holiness stopped his car, he opened the door and village representatives came forward with a bowl of rice which he blessed and asked them to share with their neighbours.

His Holiness took a short break for tea at the Government Rest House at Bhairabkunda on the border between Assam and Arunachal Pradesh, where he chatted with Chief Minister Pema Khandu and West Kameng DC Dr Sonal Swaroop. 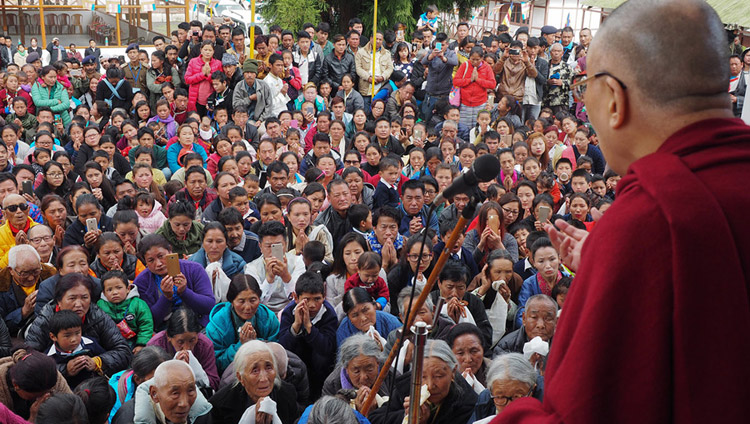 At Tenzin Gang His Holiness was made welcome at Gyuto Monastery. He paid his respects in the temple before climbing the stairs to the rooms above where lunch was served. Before resuming his journey he greeted the crowd, including several dozen school children who had gathered to see him. Speaking briefly to them he noted that Tibetans have been in exile for 58 years and that conditions in Central Tibet continue to be very difficult, although they are not quite so tough in Kham and Amdo. He praised the unflagging spirit of the Tibetan people and encouraged his listeners to be proud of their culture and the rigorous education that has been preserved in Tibet’s monastic institutions. He mentioned that although life in exile has its sad aspects, he also appreciates the enriching of experience it has brought and suggested that those who eventually return to Tibet will take with them a broader vision than before.

The motorcade drove on. It began to rain once more as it approached Bomdila, but this did not discourage people from thronging the streets to welcome His Holiness. Reaching Thubchok Gatsel Ling Monastery he paid his respects in the temple and was served ceremonial tea and sweet rice. Shortly afterwards he retired to his rooms for the night.

Tomorrow he will teach at the Bomdila Buddha Park and offer a White Tara Long-Life Empowerment in the morning and will give a public talk in the High School Auditorium in the afternoon.