Guwahati, Assam, India - The unsettled weather of the last few days continued as His Holiness the Dalai Lama set off this morning from Guwahati. Thunder rolled and lightning flashed in the distance as he drove to the airport. The consequent turbulence made the flight to Dibrugarh a little bumpy, but it landed safely and on time. 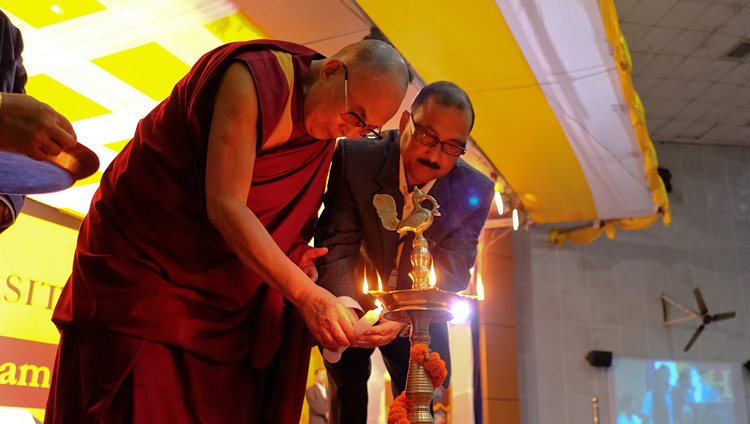 His Holiness was received on arrival at the Dibrugarh University campus at Rangghar by the Vice-Chancellor Prof Alak Kr Buragohain and Shri Chandan Sarma, Coordinator of the Buddhist Study Centre. Together they lit a lamp to inaugurate the occasion. As he took his seat on the stage with the Vice-Chancellor and the Registrar, Prof M N Dutta, His Holiness invited a senior member of the Buddhist Sangha to join them.

“Today, it’s important to acknowledge the oneness of humanity. There may be human beings in other galaxies, but we have no connection with them so there’s nothing we can do for them. Similarly, we may feel sympathy for the animals with which we share this planet, but there is not much we can do for them either. However, the other human beings around us we can communicate with because we have language in common. As human beings we are physically, mentally and emotionally the same. We really are like brothers and sisters.

“Developing compassion for others brings inner strength contributing to our own inner peace. This automatically reduces fear. This is important because fear and stress can lead to frustration, which in turn can lead to anger and violence. It’s not enough to say that violence is destructive, to prevent it we must address its causes, which very often are fear and anger.

“The natural counterforce to fear is friendship which depends entirely on trust, which in turn depends on a feeling of closeness, the sense that as human beings we are all the same. This is what I try to practise and share with other people. Whenever I speak in public I greet my audience as brothers and sisters. Differences of religion, colour, profession, family background, whether we are rich or poor, people of faith or non-believers, belonging to this nationality or that nationality are secondary in the context that we are all human beings. 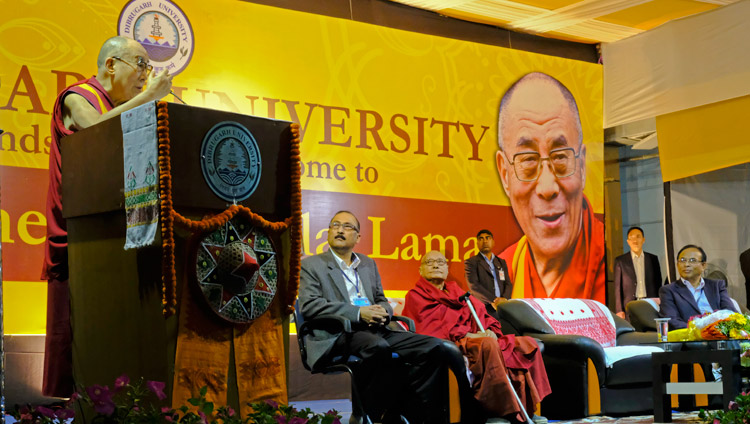 “Many of the problems we face today we bring upon ourselves because we focus on these secondary differences between us. We cling to the idea of my nation, my religion, my community, that we are rich while they are poor. This creates a strong sense of ‘us’ and ‘them’. The only remedy is to remind ourselves that we are all the same as human beings. We need to remember the oneness of humanity.”

His Holiness recommended that people ask themselves if there is any value in violence. It destroys our peace of mind. It ruins the peace and harmony within the family and then within the wider community. And yet violence proliferates. The 20th century saw two world wars, the Korean War and the Vietnam war. As a result some historians say 200 million people met violent deaths. His Holiness remarked that if this immense violence had resulted in a better world some people might say it had been justified, but there is no evidence to bear this out.

“In today’s world we face increasing natural disasters, including earthquakes, due to the effects of climate change. Yesterday in Guwahati I attended the Namimi Brahmaputra Festival celebrating the sacredness of that great river, but we know it also has a tendency to flood. Because of global warming the Himalayan glaciers are melting and less snow is falling. In Dharamsala, where I live, there is much less snow than when I arrived more than 50 years ago. In the meantime, the human population continues to increase and the gap between rich and poor continues to grow. We must find ways to raise the living standards of the poor. We must also find ways to make better use of scarce resources.

“To do this we human beings must work together. We need to share our responsibilities in order to save our planet and create a happier humanity. Thinking of others in terms of ‘us’ and ‘them’ is out of date. This is why I am committed to promoting a sense of the oneness of our human family. Wherever I go I remind people that we are all the same as human beings. The time has come to make an effort to understand that our future depends on others. In our own interest we must be concerned about others and take care of them. This is the wise way to ensure our self-interest. Neglecting others and thinking only of yourself is a foolish way to approach self-interest. 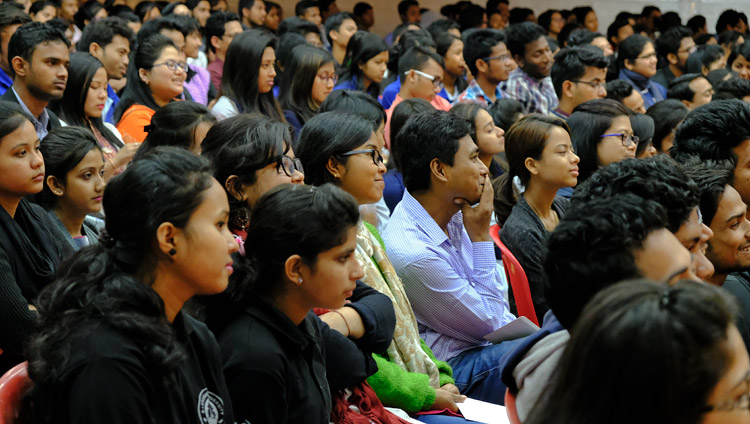 “Love and compassion are a source of inner peace and scientific research shows that a healthy mind contributes to physical well-being. Since we all wish to live in a happy and peaceful world, we should do what we can to make this 21st century a period of peace. The starting point is for individuals to create inner peace within themselves, this is how to make this a compassionate century. And it is those of you who belong to the 21st century generation who need to make this happen. Our hopes for the future rest on you.”

Turning his attention to the drawbacks of contemporary education His Holiness stressed the need for it to incorporate human values. He expressed regret that  education today is oriented towards material goals. He suggested that one solution is for modern education to be combined with an understanding of our inner world. He disclosed that one of his commitments is to trying to revive the ancient Indian knowledge of the workings of the mind and emotions. As more and more Indians show interest in this he feels encouraged, because India may be the only place where modern education could be combined with ancient knowledge leading to peace of mind.

Taking questions from the audience His Holiness was asked about the future of non-violence when violence continues to be rife across the world. He replied that humanity has changed. During the early 20th century when nations declared war their citizens unhesitatingly joined the war effort. This has changed. His Holiness reported that his physics tutor Carl Friedrich von Weizsäcker told him that after centuries of considering each other arch enemies, France and Germany decided to work together. After the Second World War DeGaulle and Adenauer created what has become the European Union, placing community welfare ahead of narrow national interest. This, he said, is a sign of human maturity. Similarly, Japan, whose conduct in the war was quite ruthless, has become a leading nation opposed to the use of force, especially the deployment of nuclear weapons. He suggested these were grounds for being optimistic. 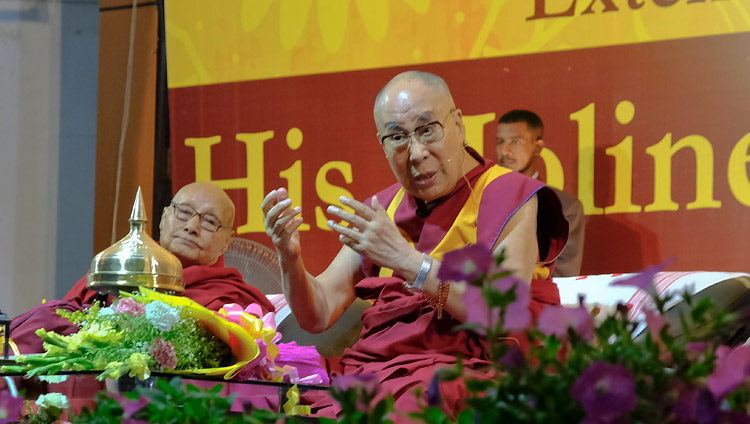 Regarding the introduction of ethics into contemporary education His Holiness reported that at the end of this month he will attend a meeting in Delhi of interested parties who have been developing a curriculum to this end. It seeks to teach values based on common experience, common sense and scientific findings. Once the draft curriculum is agreed there will follow a period to observe how it works in practice.

His Holiness warned that if the present education system continues unchanged, focussed largely on material goals, we will ensure that future generations are only interested in money and power. His aim is to introduce ethics with a universal appeal.

Asked about his recollections of reaching Tawang and Tezpur in 1959, he said they were very clear.

“Once I crossed the border the people from Tawang gave me a very warm welcome. Local officials also took care of me under instructions from the Government of India. When I reached Tezpur, I gave my first official statement to the large number of media people who had gathered there.

“Yesterday I met an old soldier from the Assam Rifles, one of those who escorted me down from the border. He is now 78 years old and although I am actually older than him, I thought he looked older than me. I was very moved to meet him again and gave him a hug. Since arriving here 58 years ago, I have become the longest-staying guest of the Indian Government. I lost my country and the Tibetans who remain there are bereft of happiness, but here in India Tibetan refugees and I have found a new freedom.”

His Holiness was invited to lunch with the Vice-Chancellor and other senior officials of the University. After that he met with almost 500 Tibetans from the Miao and Tezu settlements before flying back to Guwahati.