An Essay on Mountains

In Tibet, mountains are often considered the adobes of deities. For example, Amnye Machen, a mountain in northeastern Tibet, is regarded as the home of Machen Pomra, one of the most important deities of Amdo, my home province. Because all the people of Amdo consider Machen Pomra their special friend, many of team go round the foot of the mountain on pilgrimage.

Tibetans generally have shown little interest in scaling the peaks that surround them, perhaps out of deference to the presiding deities. However, I think there is a more practical reason. Most Tibetans have to climb far too many mountain passes to have any wish to climb higher than they must. When the people of Lhasa sometimes climbed for pleasure, they chose hills of a reasonable size, and on reaching the top would burn incense; say prayers and relax with a picnic. 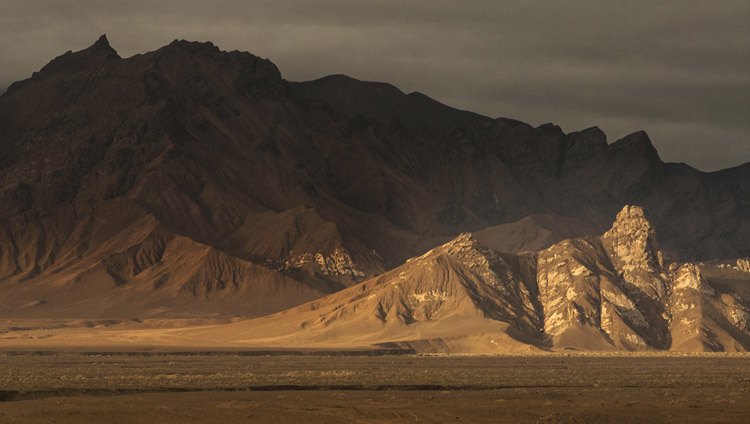 Travelers in Tibet traditionally add a stone to the Cairns at the tops of hills or passes with a shout of "Lha-gyal-Io- Victory to the gods". Later, 'Mani stones', stones carved with prayers and other scriptures may be added along with prayer flags. One practical outcoI1le of this traditional seßnse for the environment is a deep-seated concern to protect it.

Only hermits, wild animals, and, in the summer, nomads and their herds actually live high amongst them, but in the simplicity and quiet of our mountains, there is more peace of mind than in most cities of the world. Since the practice of Buddhism involves seeing phenomena as empty of inherent existence, it is helpful for a mediator to be able to look into the vast, empty space seen from a mountain - top.

In these stores of natural treasure, our doctors found many of the precious herbs and plants from which they compounded their medicines, while nomads found rich pasture for their animals, so crucial to the Tibetan economy. But of even wider-ranging impact, the Land of Snow's mountains arc; the source of many of Asia's great rivers. The recent massive floods on the Indian sub-continent and in China can be attributed, in part, to the massive deforestation and environmental destruction that has followed China's violent occupation of Tibet.

For over 1,000 years we Tibetans have adhered to spiritual and environmental values in order to maintain the delicate balance of life across the high plateau on which we live. Inspired by the Buddha's message of non-violence and compassion and protected by our mountains, we have sought to respect every form of life, while our neighbors lived undisturbed.

These days when we talk about preservation of the environment, whether we mean the wildlife, forests, oceans, rivers or mountains, ultimately the decision to act must come from our hearts. So, the key point, I think, is for all of us to develop a genuine sense of universal responsibility, not only toward s this beautiful blue planet that is our home, but also towards the innumerable sentient beings with' whom we share it.