It is an honour for me to have been awarded the Templeton Prize. When I first heard of the Templeton Foundation's decision, I really felt it was in recognition of my small service to humanity, in promoting non-violence, respect and harmony among the world's different religious traditions, and encouraging greater understanding between modern science and Buddhist science.

On the one hand, I have totally dedicated my life to bringing about a closer understanding among our different religious traditions. On the other hand, in a world in which many of the problems we face are man-made, I have tried to encourage the finding of ways and means to solve these various problems strictly through non-violence and dialogue. 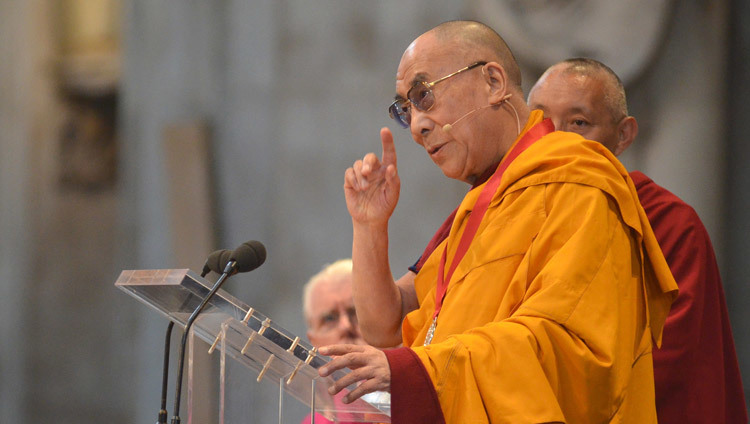 The twentieth century was a very important period in human history, a time when we made great developments, but it was also a century of great bloodshed. If the violence of the twentieth century had resulted in a better world, there might have been some justification for it. But that was not the case; the result of such immense violence was suffering. If we learnt from common sense and past experience, we should understand that whenever we face problems we need to tackle them in a non-violent way. I believe it is very important that we try to make this twenty-first century a century of dialogue. In addition to non-violence in our relations with each other, we also need to employ a much greater sense of non-violence in relation to the environment, because a healthy natural environment is essential to the survival of life on our planet.

Another area of interest to me has been exploring the exchange of ideas between science and spirituality, particularly between such fields as neuroscience and Buddhist science. For nearly thirty years, I have engaged in dialogues with scientists, specialists in many fields, discussing not only what reality is, but the still more important question of how it may influence ethics and human values.

I am grateful too to the Templeton Foundation for inviting me here to London to receive the Prize and the opportunity to meet many old friends in this historic location.