A Collaboration Between Science and Religion

By His Holiness Tenzin Gyatso, the 14th Dalai Lama

These are times when destructive emotions like anger, fear and hatred are giving rise to devastating problems throughout the world. While the daily news offers grim reminders of the destructive power of such emotions, the question we must ask is, what can we do to overcome them?

Of course such disturbing emotions have always been part of the human condition - humanity has been grappling with them for thousands of years. But I believe we have a valuable opportunity to make progress in dealing with them, through a collaboration between religion and science. 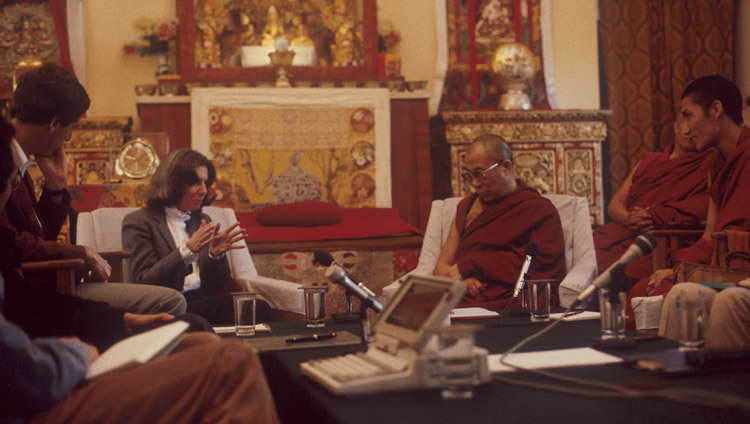 With this in mind, I have, since 1987, engaged in an ongoing series of dialogues with groups of scientists. Organized by the Mind & Life Institute, they have been on topics ranging from quantum physics and cosmology to compassion and destructive emotions. I have found that while scientific findings offer a deeper understanding of such fields of knowledge as cosmology, it seems that Buddhist explanations can sometimes give scientists a new way to look at their own field.

Our dialogue has provided benefits not just for science, but also for religion. Though Tibetans have valuable knowledge about the internal world, we have been materially backward partly because of a lack of scientific knowledge. Buddhist teachings stress the importance of understanding reality. Therefore, we should pay attention to what modern scientists have actually found through experiment and through measurement the things they have proved to be reality.

At the beginning of these dialogues there were very few of us from the Buddhist side at first just myself and two translators. But recently, we have started to introduce modern science studies in our monasteries, and at our most recent science dialogue there were twenty or so Tibetan monks in the audience.The goals of the dialogue are on two levels. One is at the academic level, the expansion of knowledge. Generally speaking science has been an extraordinary tool for understanding the material world, making vast progress in our lifetime though of course there are still many things to explore. But modern science does not seem to be as advanced regarding internal experiences.

In contrast, Buddhism, an ancient Indian thought, reflects a deep investigation into the workings of the mind. Over the centuries many people have carried out what we might call experiments in this field and have had significant, even extraordinary, experiences as a result of practices based on their knowledge. Therefore, more discussion and joint study between scientists and Buddhists scholars on the academic level could be useful for the expansion of human knowledge.

On another level, if humanity is to survive, happiness and inner peace are crucial. Otherwise the lives of our children and their children are likely to be unhappy, desperate and short. The tragedy of 11th September 2001 demonstrated that modern technology and human intelligence guided by hatred can lead to immense destruction. Material development certainly contributes towards happiness - to some extent - and a comfortableway of life.   But this is not sufficient.  To achieve a deeper level of happiness we cannot neglect our inner development.  I feel, for example, that our sense of fundamental human values has not kept pace with powerful new developments in our material abilities.

For that reason I have been encouraging scientists to examine advanced Tibetan spiritual practitioners, to see what effects of their spiritual practice might be of benefit to others, outside the religious context. One approach would be to take the help of scientists in trying to make the workings of these inner methods clear. The important point here is to increase our understanding of the world of the mind, of consciousness, and of our emotions.

Experiments have already been carried out that show some practitioners can achieve a state of inner peace, even when facing disturbing circumstances. The results show such people to be happier, less susceptible to destructive emotions, and more attuned to the feelings of others. These methods are not just useful, but cheap: you don't need to buy anything or make anything in a factory. You don't need a drug or an injection.

The next question is how are we to share these beneficial results with people beyond those who happen to be Buddhists. This does not concern Buddhism as such or any other religious tradition - it is simply a matter of trying to make clear the potential of the human mind. Everybody, whether rich or poor, educated or uneducated, has the potential to lead a peaceful, meaningful life. We must explore as faras we can how that can be brought about.
In the course of that exploration, it will become obvious that most disturbances are stimulated not by external causes but by such internal events as the arising of disturbing emotions. The best antidote to these sources of disruption will come about through enhancing our ability to handle these emotions ourselves. Eventually we need to develop an awareness that provides the ways and means to overcome negative, disturbing emotions ourselves.

The spiritual methods are available, but we must make these acceptable to the mass who may not be spiritually inclined.  Only if we can do that will these methods have the widest of effect.  This is important because science, technology, and material development cannot solve all our problems. We need to combine our material development with the inner development of such human values as compassion,tolerance, forgiveness, contentment and self-discipline.