The Dangers of Changing Religions

There are many different religions and cultures in the world and each has developed to suit its own people. Because of that, I always recommend that it’s best to keep the religion you were born into. In the West, most people are Christians, although there are also some Jews and some Muslims. For them, or for anyone, to change religions is not easy and sometimes it just creates confusion. 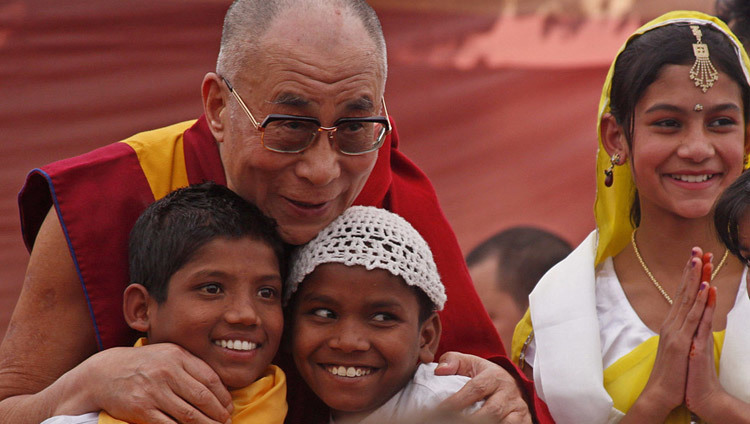 There’s one example that I always mention. In the early 1960’s, we Tibetans faced great difficulties. At that time, many Christian organizations came to help us. There was one Tibetan lady who had several small children and she faced a very difficult situation. Then a Christian missionary came and accepted her children to go to a Christian missionary school. One day she came to me and told me that in this life she’s going to be a Christian, but in her next life she’s going to be a Buddhist. This clearly indicates that she had some confusion about religion.

Also there was one old Polish lady, I knew her from 1956. From 1959 onwards, she took serious interest in education and gave scholarships to several Tibetan students. She became interested in Buddhism, but before that she was a Theosophist in Madras. So already she had some nonsectarian type of point of view, but she accepted Buddhism as her personal religion. At the end of her life, the concept of God seemed to be closer to her mind and this also indicates a sign of confusion. Therefore, it’s best to keep your own religion.

Among millions of people, however, some will instinctively have an interest in Eastern religions, especially Buddhism. These people need to think carefully. If they find Buddhism more suitable to their own dispositions, then okay, it’s alright. Like among Tibetans, 99% of us are Buddhists. But over the last four centuries, there have been some Ladakhi Muslims living in Tibet, who have married Tibetans and their children have become Muslim. Also there have been some Christians in the Amdo area. So, okay, with both of them, no problem.

Also, I must mention that when someone takes a new religion, they must avoid a negative view toward their original tradition, which often comes up as part of human nature. Even if you find your old tradition not very helpful to you, it doesn’t imply in general that it’s not very helpful. All religions offer help to humanity. Especially when facing difficult situations, all religions offer hope. Therefore, we must respect all religions.

Learning from Each Other’s Religions

Also, today’s reality is a little bit different from the past reality. In the past, people from different traditions remained more or less isolated. The Buddhists stayed in Asia; the Muslims in the Middle East and some in Asia; and in the West there were mostly Christians. So there was very little contact. But now the times are different. There are many new waves of immigration taking place; there’s economic globalization and also the growing tourist industry. So much information is now available, including information about Buddhism. Because of these various factors, our world community has become like one entity: a multi-cultural, multi-religious singular entity. 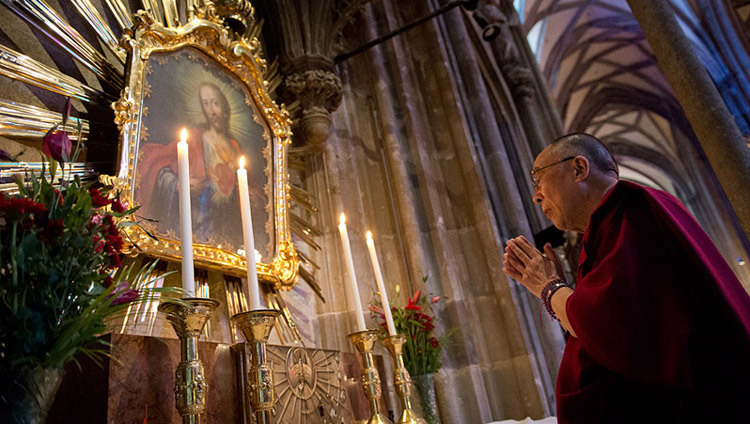 So here there are two possibilities of what can happen. The first one is that because of close contact between different traditions, sometimes there’s a little sense of insecurity about our own tradition. The other tradition comes into more contact with us, so we feel a little bit uncomfortable. That’s a negative possibility. The second possibility is that because of this reality of more communication, the opportunities to develop genuine harmony between traditions have grown. This is a more positive possibility and so now we must make effort to establish true harmony. If we leave aside the religions that do not have any philosophical basis, but just faith in worshipping the sun or moon or these type of things, if we leave those aside but look at the major world religions – Christianity, Judaism, Islam, different Hindu and Buddhist traditions, Jainism, Daoism, Confucianism, and so on – each of these has its own specialty. Therefore, through close contact, we can learn new things from each other; we can enrich our own traditions.

We Tibetan Buddhists, for example, we remained isolated behind the Himalayan mountains; we had no idea what was taking place in the outside world. But now the situation has completely changed. Now, for almost 50 years as homeless refugees, we’ve found new homes and many opportunities to learn from other traditions in other countries. This has been extremely useful. In the past, we have established exchange programs here in India: Christian brothers and sisters came to India to learn from us and some of our Tibetan monks and nuns went to the West and had experience in Christianity, mostly in Catholic monasteries. So, with close contact in that way, if we don’t remain closed-minded but open up, then we can learn something from each other. That way, we can develop mutual understanding and respect. And anyway, a new reality is there. Therefore, I think that the development of mutual harmony among different religions is very important. This is one of my commitments until my death, to promote religious harmony. This is very helpful.

So, when I give lectures on Buddhism to audiences in the West who are mostly followers of other religions, then, the aim is to help these people to develop some understanding of Buddhism. That can be helpful for the development of tolerance. Then, perhaps like the present Pope stresses, the emphasis needs to be on both faith and reason together. That’s very important. Without reason, sometimes faith remains a little irrelevant. But with reason, faith can become a part of life that is extremely relevant. Faith in God, for example, can be extremely helpful, like when a person is going through difficult periods it gives that person great hope. And if we think in terms of anger, hatred, jealousy, the wish to cheat and bully others, then if we have faith, faith protects us against such negative emotions and actions. When we realize this, then faith becomes very important in daily life. In the Buddhist tradition, we place emphasis equally on faith and reason. So, some Buddhist explanations, particularly those based on reason, might be useful to practitioners of other traditions.

In the variety of religious traditions present in today’s world, there are two categories: those that are theistic and those that are non-theistic. Buddhism is one of the non-theistic ones. According to non-theistic religions, the emphasis is on the law of causality. So naturally, there’s a great deal of explanation of the law of cause and effect in Buddhism, and this is something which is very useful to know. It is useful in that it helps us to know more about ourselves and about our minds.

We need to realize, for example, that destructive emotions and attitudes are the sources of our suffering and pain. To eliminate suffering and pain, we need to focus not just on their physical and verbal levels, but also on the mental. The counterforces for them are also mostly mental.

In the Buddhist tradition, the explanation of the mind is very detailed. Also, we find the same in some ancient Indian traditions. Therefore now, today, modern science is investigating deeper and deeper in this area. For instance, medical science is beginning to carry out research on emotions, since they are very important in relation to our health. A healthy body is related to emotions. So it is especially important for neurologists investigating how the brain works to look more at emotions. In other academic fields as well, there is also a big interest in the mind and emotions. Therefore, information about the mind and emotions from Buddhism and from ancient Indian religions is very useful for their research.

Usually I distinguish three parts of Buddhism: Buddhist science, Buddhist philosophy and Buddhist religion. Look at the example of Buddha himself. Buddha originally was an ordinary sentient being, a limited being. He taught how to transform our ordinary emotions and minds step by step and, by following that path himself, he finally became enlightened, and that’s a Buddha. Therefore, the Buddhist approach is to start on this level, the level of ordinary people, and then proceed on that level all the way up to Buddhahood.

Because of that, then firstly, we have to know today’s reality: that entails Buddhist science. Then, on that basis, we see the possibility of change, of transformation. We see that change is possible and that’s the Buddhist philosophy. When that becomes clear to us and we have confidence in the process of inner transformation, then we can start the practice of Buddhist religion.

So if we look back at Buddhist science, there are two areas that it deals with: internally, the mind, and externally with atoms, the universe and so on. Western science has much to offer on the external level: it seems to be extremely advanced in that area. We Buddhists can learn much from it about particles, how they function, about genetics, about the universe – these are very useful for us as Buddhists. At least, in terms of this planet, it’s quite clear that there is no Mount Meru. So, some of our classical descriptions must also be changed. Therefore, the scientific findings in the fields of cosmology, particle physics, quantum physics, and so on, are very essential for us Buddhists to learn.

Some findings of modern science and Buddhism, however, are the same. For example, originally, people believed that there was some sort of self-sufficient, independent substance on the side of objects. But now, according to the findings of quantum physics, we see that there is no such thing. We Buddhists have had this understanding for thousands of years. Buddhism teaches that nothing is self-sufficiently arising or self-sufficiently existing, but rather everything dependently arises.

Now, in terms of inner knowledge, modern science is starting to conduct some investigations, so there can be mutual benefit. Buddhists can learn about external phenomena from science and science can learn how to deal with negative emotions and such internal phenomena from the Buddhists. So, when we speak with the scientists, it’s not about future lives or nirvana. We don’t speak about religious aspects, but rather we speak about the mind and emotions. This is because we have the same method: we investigate things in order to find out about reality.

So those of you Westerners who are interested in Buddhism, it’s helpful to carry out your own scientific research. So, on that basis of offering the opportunity to investigate the Buddhist teachings with a scientific attitude, it seems alright for me to give lectures on Buddhism to non-Buddhist audiences. Because of that, then please look at my talks somewhat like academic lectures. Except for some chanting at the start, there are no rituals, no religious aspects in my talks. I just give scientific lectures. What do you think?

His Holiness the 14th Dalai Lama
courtesy of studybuddhism.com