I am extremely delighted to attend this inter faith seminar on the Preservation of Religious Harmony, Co­existence and Universal Peace organised by the International Association for Religious Freedom (IARF), Ladakh group. Thank you very much for the detailed explanation of the association's history, activities, objectives and their relevance in the present century. I have nothing to add on what the speakers said earlier. But I would like to say a few things. 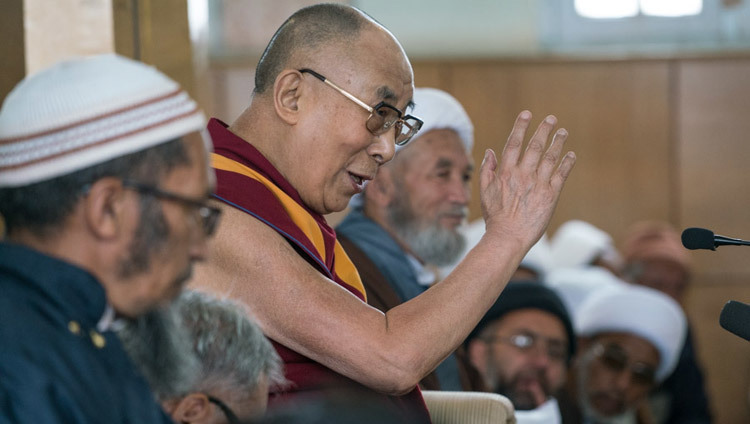 We are now in the twenty ­first century. The quality of research on both the inner and physical world has reached quite high levels, thanks to the tremendous stride in technological advancement and human intelligence. However, as some of the speakers said before, the world is also facing a lot of new problems, most of which are man­-made. The root cause of these man­-made problems is the inability of human beings to control their agitated minds. How to control such a state of mind is taught by the various religions of this world.

I am a religious practitioner, who follows Buddhism. More than a thousand years have passed since the great religions of the world flourished, including Buddhism. During those years, the world had witnessed a lot of conflicts, in which followers of different religions were also involved. As a religious practitioner, I acknowledge the fact that different religions of the world have provided many solutions about how to control an agitated mind. In spite of this, I still feel we have not been able to realise our full potential.

I always say that every person on this earth has the freedom to practice or not practice religion. It is all right to do either. But once you accept religion, it is extremely important to be able to focus your mind on it and sincerely practice the teachings in your daily life. All of us can see that we tend to indulge in religious favouritism by saying, "I belong to this or that religion", rather than making effort to control our agitated minds. This misuse of religion, due to our disturbed minds, also sometimes creates problems.

I know a physicist from Chile who told me that it is not appropriate for a scientist to be biased towards science because of his love and passion for it. I am a Buddhist practitioner and have a lot of faith and respect in the teachings of the Buddha. However, if I mix up my love for and attachment to Buddhism, then my mind shall be biased towards it. A biased mind, which never sees the complete picture, cannot grasp the reality. And any action that results from such a state of mind will not be in tune with reality. As such it causes a lot of problems.

Any issue, including political, economic and religious activities human beings pursue in this world, should be fully understood before we pass our judgement. Therefore, it is very important to know the causes. Whatever the issue, we should be able to see the complete picture. This will enable us to comprehend the whole story. The teachings offered in Buddhism are based on rationality, and I think are very fruitful. 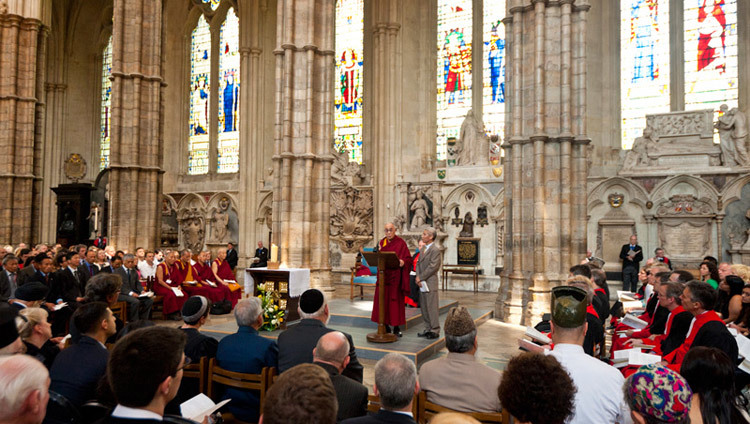 Today, a lot of people from different religious backgrounds are present here. In every religion, there are transcendent things that are beyond the grasp of our mind and speech. For example, the concept of God in Christianity and Islam and that of wisdom truth body in Buddhism are metaphysical, which is not possible for an ordinary person like us to realise. This is a common difficulty faced by every religion. It is taught in every ­religion, including Christianity, Buddhism, Hinduism and Islam, that the ultimate truth is driven by faith.

I want to emphasise that it is extremely important for practitioners to sincerely believe in their respective religions. Usually, I say that it is very important to distinguish between "belief in one religion" and "belief in many religions". The former directly contradicts the latter. Therefore, we should resolutely resolve these contradictions. This is possible only by thinking in contextual terms. A contradiction in one context might not be the same in the other. In the context of one person, a single truth is closely associated with a single source of refuge. This is of extreme necessity. However, in the context of society or more than one person it is necessary to have different sources of refuge, religions and truths.

In the past it was not a major problem because nations remained aloof from each other with their own distinct religion. However, in today's close and inter-connected world there are so many differences amongst various religions. We must obviously resolve these problems. For example, there have been a lot of religions in India for the past thousand years. Some of them were imported from outside whereas some have grown in India itself. Despite this, the fact is that these religions have been able to coexist with each other, and the principle of Ahimsa has really flourished in this country. Even today, this principle has a strong bearing on every religion. This is very precious and India should really take pride in it.

Ladakh has been a predominantly Buddhist area 'for so many centuries. But other religions such as Islam, Christianity, Hinduism and Sikhism have also flourished here. Although it is natural for the people of Ladakh to have attachment to and love for their own religions, yet this place has a very peaceful environment with no major problems of religious intolerance. During my maiden visit to Ladakh, I heard elderly Muslims using the phrase "community of sangha" in their speeches. Although such phrases are not found in Islam, yet a reference of this kind invokes a lot of trust amongst the Buddhists. Therefore, people from different religious background in Ladakh are very close to each other and live in harmony.

As far as the Muslims are concerned it is appropriate for them to have complete devotion to Allah while praying in the mosques. This is also the same with Buddhists who are completely devoted to the Buddha when they pray in Buddhist temples. A society, which has many religions should also have many prophets and sources of refuge. In such a society it is very important to have harmony and respect amongst the different religions and their practitioners. We must distinguish between belief and respect. Belief refers to total faith, which you must have in your own religion. At the same time you should have respect for all other religions. This tradition of believing in one's own religion and having respect for others is in existence in Ladakh since your forefathers. Therefore you do not have to invent it. The most important thing at the moment is to preserve and promote this tradition. I would like to thank all of you for working hard regarding this and request you to continue to do so in the future.

If a harmonious relationship is established amongst societies and religious beliefs in today's multi-ethnic, multi-religious and multi-cultural world, then it will surely set a very good example for others. However, if all the sides become careless, then there is a danger of imminent problems. In a multi­ethnic  society  the biggest problem is that of between the majority and the minority. For instance, in the capital Leh, Buddhists constitute the majority of the population whereas Muslims belong to the minority community. The majority must consider the minority as their invited guests. The minority, on the other hand, should be able to sensitise with the majority. In other words, both sides should live in harmony. In order to sustain this harmony, both sides should not take lightly the sensitive issues between themselves. Indeed, the majority should pay attention to and appreciate the views and opinion of the minority. Both sides should discuss and clearly express what they think about the other's view and opinion. The minority, on the other hand, should be careful about where the sensitive issues of the majority lies and express whatever doubts they have in their minds. If problems are resolved in such a friendly manner; then both sides will gain. Suspicion of each other will only harm both communities. Therefore, it is very important to live in harmony and analyse where the opinion of the other lies. The best way to do this is to engage in dialogue, dialogue and dialogue.

Excerpts from His Holiness the Dalai Lama's address to the inter-faith seminar organised by the International Association for Religious Freedom, Ladakh Group, in Leh on 25 August 2005.